Prior to the tour’s launch, LoMenzo stated about the latest version of HAIL!: “We’re back! In always creating that once-in-a-lifetime experience for all our fans around the world, HAIL!‘s newest lineup for this tour will feature Chris Adler, Steve ‘Zetro’ Souza, Phil Demmel and myself, James LoMenzo.”

Demmel, who played with HAIL! in 2010, said: “I am so stoked to jam with all my bros Zet, Chris and James in HAIL! and bring our brand of metal insanity to the lunatics overseas. Strap in, you maniacs, it’s going to KILLER!!!”

HAIL! creator/manager Mark “Abba” Abbattista added: “Although we’ve laid low the past few years, we never went away, nor will we ever. We were waiting for the right time to re-unleash our onslaught and now is that time. In keeping with our tradition of bringing the best in metal to some far-off places, we are thrilled to announce the first leg of our upcoming tour:”

Zetro said: “I’m absolutely excited to head to some places I have never played to bang my head with such loyal metal fans, and I’m honored to be surrounded by such heavy hitters like Phil Demmel, Chris Adler and James LoMenzo. HAIL!!! To anyone coming out for this metal onslaught — buckle your seatbelts, your lives will never be the same! HAIL!!!”

Adler agreed: “I’m looking forward to meeting the fans and exploring all of these off-the-beaten-path locations, and I’m psyched to be doing it with three of the coolest and down-to-earth guys I’ve met over my career. HAIL!”

HAIL! said: “We have been doing this for over 10 years and played in almost 30 countries. The appeal of HAIL! is timeless and universal because it’s pure and it’s real. Our reason is simple — we love to play songs we love to fans who love hearing them!”

This past July, LAMB OF GOD officially parted ways with Adler. His replacement is Art Cruz, who has previously played with PRONG and WINDS OF PLAGUE, and filled in for Adler on several LAMB OF GOD tours in the past year and a half. 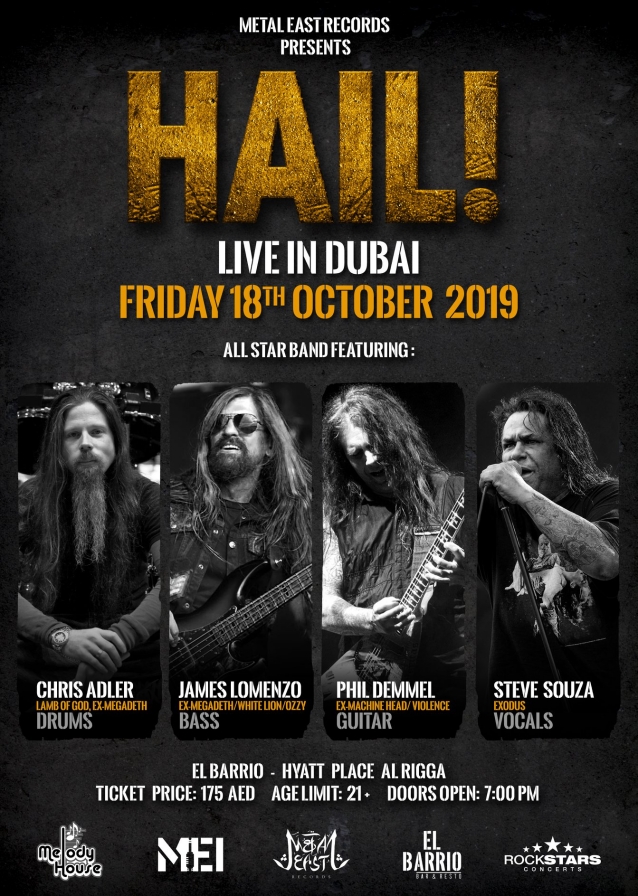