ANTHRAX Bassist: 'I Don't Think SLAYER Will Ever Die'

As Swedish grindcore outfit AXIS OF DESPAIR — formed by current and former members of NASUM, COLDWORKER, INFANTICIDE, VOLTURYON, LIVET SOM INSATS, NERVGIFT, OVERTORTURE, and more — prepares its “Contempt For Man” debut full-length for July release through Southern Lord, two new tracks have been issued alongside preorders for the record.

AXIS OF DESPAIR‘s “Contempt For Man” propels with twenty super-charged, raging songs, clocking in around the half-hour mark. The album surges with blasting percussion delivered with savage force, yet every hit finding its target with pinpoint accuracy. The blazing, hook-laden riffs leave charred scars in their path, while lyrically the band unloads their noncompliance with humanity’s declining ways. “Contempt For Man” was recorded by drummer Anders Jakobson at Soundlab Studios and in the band’s rehearsal room summer 2017, mixed at Studio Ülgnor by Johan Berglund, and completed with artwork by Paul Romano (MASTODON, CIRCLE, HATE ETERNAL).

AXIS OF DESPAIR‘s “The Wolven Law” and “Crush The Empire” are now streaming alongside the previously released “A Life Of Ceaseless Grind”.

Southern Lord will release “Contempt For Man” on LP, CD, and digital formats on July 27.

AXIS OF DESPAIR will perform at Obscene Extreme 2018 in Czech Republic on July 19, with more live actions to follow.

AXIS OF DESPAIR was formed in late 2013 by former COLDWORKER members Joel Fornbrant (vocals), Oskar Pålsson (bass) and Anders Jakobson (drums). The lineup was completed by guitarist Kristofer Jankarls (also in LIVET SOM INSATS) a few months later and the quartet focused on songwriting. The first recording took place in the spring of 2015 and the twelve tracks were released on the two seven-inch EPs — “Time And Again”, released via Selfmadegod Records, and “Mankind Crawls”, a co-release through Give Praise Records and Spela Snabbare Records. Following both EPs and several live shows, AXIS OF DESPAIR set to work on new material, striving to create a striking grindcore album with an aggressive, yet diverse selection of strong songs. The writing process was spread out over a year until the band went into the studio and begun the recordings in the summer of 2017, now set to arrive in the form of their debut album, “Contempt For Man”.

Contempt for Man by Axis of Despair 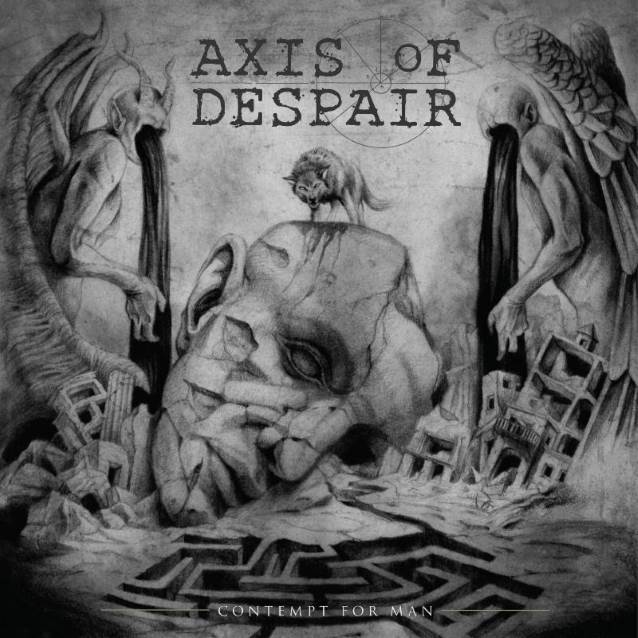