Album Review: Tribulation – “Down Below”

DEVILDRIVER will release its full-length album of outlaw country-gone-metal anthems, “Outlaws ‘Til The End: Vol. 1”, on July 6 via Napalm Records. Pre-orders are available now in multiple physical (click “official store”) and digital/streaming formats via this location. Merch bundles are also available via the official store. Additional merchandise such as t-shirts, long-sleeve shirts, flasks, keychains, and more are also available here.

After weeks of anticipation from fans, DEVILDRIVER has dropped a second track from the album — the band’s metallicized, aggressive cover of the outlaw classic “Ghost Riders In The Sky”. The track features the talents of album guests John Carter Cash (son of country music legend Johnny Cash), Ana Cristina Cash, and renowned LAMB OF GOD vocalist Randy Blythe.

A music video featuring exclusive in-studio footage below can be seen below.

DEVILDRIVER frontman Dez Fafara says: “It was both an honor and a privilege to work with these three great artists. Watching John Carter Cash and Ana Cristina Cash track vocals at the Cash Cabin was a highlight of my career. Meeting such down-to-earth and incredibly talented people and having them come on board ‘made’ the project for me, personally. Tracking with Randy was another highlight. He’s a brother and watching how he tracked, and vice versa, was a learning process for both of us that we both spoke highly about and enjoyed immensely. All of us on this song gave 110% to make sure it was done right! Enjoy!”

John Carter Cash adds: “All my life I have loved the power and eerie quality of the song ‘Ghost Riders In The Sky’. Since I was nine years old, I have lived and breathed heavy metal music. I am grateful to have had the chance to work with Dez Fafara, Randy Blythe, DEVILDRIVER and others, in the upcoming release of what I believe is the consummate metal version of this musical masterpiece.”

Ana Cristina Cash says: “I am so proud to have been a part of ‘Outlaws ‘Til The End: Vol. 1’ and to have sung on the metal version of ‘Ghost Riders In The Sky’ with my husband John Carter Cash, Dez Fafara, Randy Blythe and DEVILDRIVER. This whole album pushes boundaries and merges the outlaw country and the metal genres in a masterful way.”

Randy Blythe offers: “I am a huge fan of moody songs with narrative lyrics employed to tell a dark story — they really make the listener visualize what the song is about. I can’t think of many tunes where this was done more effectively than Johnny Cash‘s version of ‘Ghost Riders In The Sky’. Long before heavy metal had been invented, the original Man in Black wasn’t afraid to explore the dark side with his music. Truly great songs never die — they just shape-shift through the years. Singing with Dez, John Carter and DEVILDRIVER is keeping those undead riders alive in a whole different genre. Crank this up and look to the sky at night…”

“Outlaws ‘Til The End” was produced, mixed and recorded with Steve Evetts (THE DILLINGER ESCAPE PLAN, EVERY TIME I DIE, SEPULTURA, THE CURE), with DEVILDRIVER guitarist Mike Sprietzer also lending recording talents. The album was mastered by renowned engineer Alan Douches.

“Outlaws ‘Til The End” track listing:

06. “If Drinking Don’t Kill Me (Her Memory Will)”
Written by Harlan Sanders, Rick Beresford; recorded by George Jones
Performed by Wednesday 13 & Dez Fafara

07. “The Man Comes Around”
Written by Johnny Cash
Performed by Lee Ving of FEAR & Dez Fafara 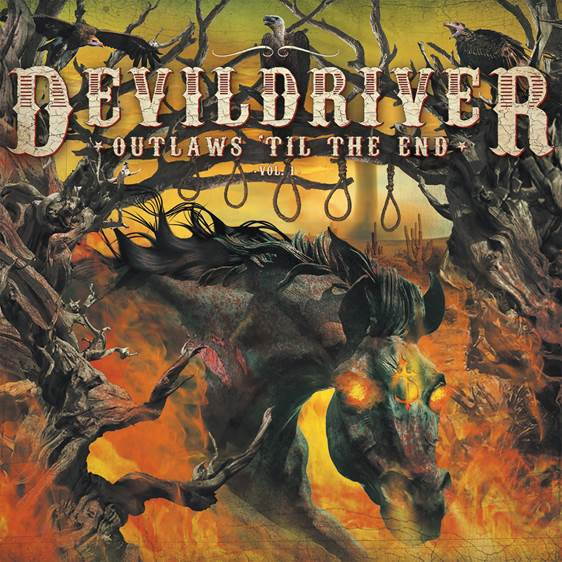