TAD MOROSE Releases Video For 'I Am Night'

SYSTEM OF A DOWN guitarist Daron Malakian‘s long-dormant side project, SCARS ON BROADWAY, has released a brand new single and video. “Dictator” is the title track of the band’s new album, which will be released on July 20. The band itself, now rebranded DARON MALAKIAN AND SCARS ON BROADWAY, has undergone a complete overhaul, with none of the members from the group’s 2008 debut — including SYSTEM drummer John Dolmayan — appearing on the new songs.

Malakian explained the personnel changes in an online post, saying: “Nobody quit. When I first started SCARS, I always said that it would be different lineups from album to album. Depends on the type of direction I want to take. Different musicians work for different styles. That is partly why I added my name in front of the band’s.”

“Dictator” follows the release of the album’s first track/video, “Lives”, which was directed by Hayk Matevosian. The clip, about celebrating life in the face of tragedy, is already closing in on two million YouTube views.

Both “Lives” and “Dictator” are available as instant downloads when pre-ordering “Dictator” ahead of its release on iTunes or Amazon.

“Dictator” saw Malakian write, produce and play every instrument — including all vocals — over the course of a 10-day recording session. The album’s cover art was created by Daron‘s father, Vartan Malakian, who also designed the artwork for SYSTEM OF A DOWN‘s twin 2005 releases, “Mezmerize” and “Hypnotize”.

“I told my Dad that the album was going to be titled ‘Dictator’,” recalls Daron. “I didn’t go into any other details. I went to my parents’ house a week later and he already had the album cover done.”

“Dictator” was recorded in 2012 but has remained unreleased — until now.

“I recorded the album, and then around that time, SYSTEM started playing live again,” Daron told Rolling Stone. “So every time we’d play live, there’d be conversations like, ‘Maybe we’ll do an album.’ So being the guy who wrote the majority of almost all the SYSTEM songs in the past, I was, like, ‘All right, let me see what’s happening with it. Let me hold on to these songs and let me see how this develops.’ We talked about it and we weren’t all on the same page. Not everybody was into the idea. But every time we played live, it kept coming up.

“I just got to the point now where a lot of people were asking about the SCARS album — I hear it all the time — so I was. like, ‘I’m gonna put this album out.’ Not knowing what’s happening with SYSTEM has kept me from putting my own stuff out. Too much time has passed, and I’m really excited to finally get some music out finally.”

Daron also confirmed that everything on the album is from 2012. “Yeah,” he said. “I played everything on it. I went into the studio and recorded an album in less than 10 days. I played all the instruments — the drums, everything — and I’ve just been sitting on it for six years. [Laughs]”

SCARS ON BROADWAY has just the one LP to its credit so far and last performed in 2012 as the opening act for DEFTONES in Los Angeles.

The group has only played live sporadically over the years: a headlining trek in 2008 was canceled, with Malakian citing his lack of enthusiasm and “his heart not being into touring” as the chief reasons behind the decision.

The guitarist later explained that he thought it was “almost too soon” for him to go on the road after SYSTEM OF A DOWN went on hiatus in 2006, also citing issues in his personal life that “made it impossible” for him to tour.

SYSTEM OF A DOWN, which has toured intermittently since ending its hiatus in 2011, has some shows coming up this year but has not released new music in 12 years. 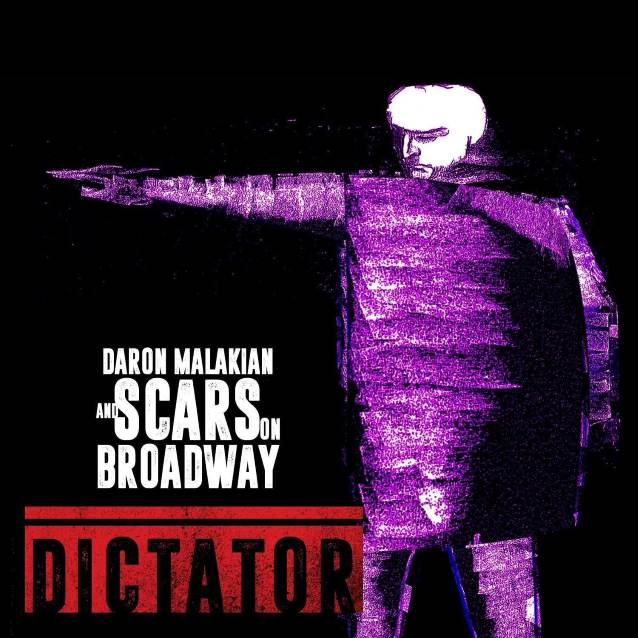