Listen To Full Fourth Episode Of 'The Osbournes' Podcast

BLACK VEIL BRIDES: 'When They Call My Name' Video Released

Steve Harris, bassist and co-founder of metal icons IRON MAIDEN, will bring his side project BRITISH LION to Canada for the first time. Dates begin in Toronto on November 1, stopping in Kitchener, Ottawa, Montreal and Quebec City.

Harris formed BRITISH LION in 2012 and released a debut album with touring concentrated mainly in Europe. With a second album in the works, BRITISH LION has announced dates in Brazil and Japan and are excited to add the five Canadian shows to their schedule.

Harris has invited his longtime friends in CONEY HATCH to be special guests on the Canadian dates, making this the first time since IRON MAIDEN‘s 1983 “Piece Of Mind” tour that Steve and CONEY HATCH will share the same stage.

CONEY HATCH returned in 2013 with the release of “Coney Hatch Four”.

“We’re honored that Steve invited us to be part of his first-ever BRITISH LION Canadian tour; it’ll be like déjà vu,” said Andy Curran, bassist and lead vocalist of CONEY HATCH.

BRITISH LION‘s debut album sold around 3,000 copies in the United States in its first week of release. The CD landed at position No. 3 on the Top New Artist Albums (Heatseekers) chart, which lists the best-selling albums by new and developing artists, defined as those who have never appeared in the Top 100 of The Billboard 200.

“British Lion” was released in the U.S. in September 2012 via Universal Music Enterprises (UMe). Mixed by Kevin Shirley — whose credits include IRON MAIDEN as well as LED ZEPPELIN, JOURNEY and RUSH — the CD featured Harris alongside singer Richard Taylor, guitarists Graham Leslie and David Hawkins and drummer Simon Dawson. 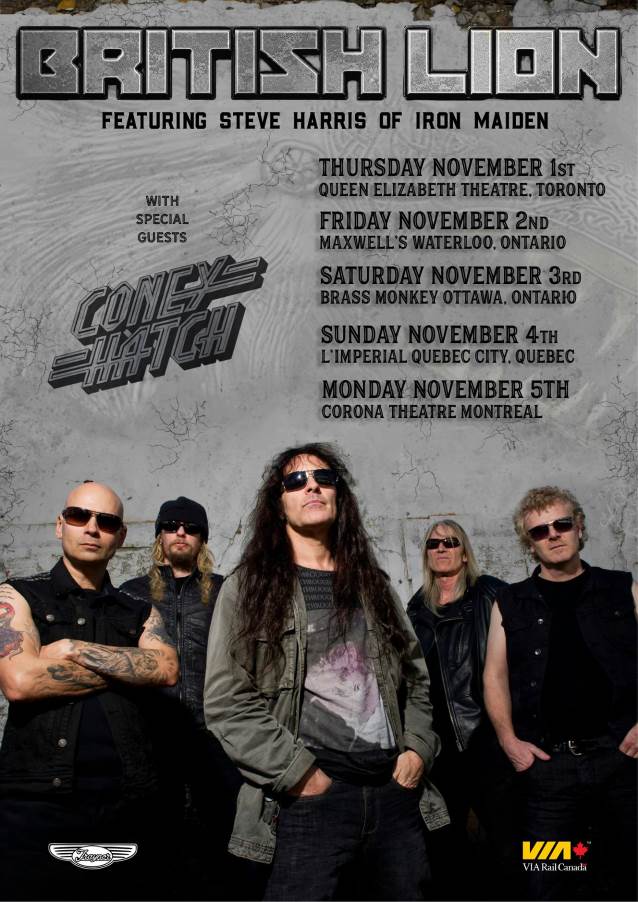