RAVEN To Release New Live Album 'Screaming Murder Death From Above: Live In Aalborg' In January

Duke TV has uploaded video footage of the April 20 concert by AC/DC drummer Chris Slade‘s band THE CHRIS SLADE TIMELINE, which finds him performing selections across his five-decade career. The clip, which was filmed at L’Empreinte in Savigny-le-Temple, France, can be seen below.

Slade said in a recent interview with Duke TV that his “lips are sealed” about whether or not AC/DC plans to record a new studio album with Axl Rose on vocals. Asked about the group’s future recording activities, Slade answered: “My lips are sealed. And if I knew, I couldn’t say a word anyway. What I usually say is if I tell you, I have to kill you.” He added: “Which, perhaps, is not in good taste. I couldn’t even start to answer that, I’m afraid.”

Ever since AC/DC completed the tour cycle for its 2014 album “Rock Or Bust” nearly two years ago — a turbulent trek that weathered the forced retirement and eventual death of co-founder Malcolm Young, plus the departures of longtime singer Brian Johnson, drummer Phil Rudd and bassist Cliff Williams — fans have wondered whether sole founding member Angus Young would keep the band going.

Although Slade decline to elaborate, ROSE TATTOO singer Angry Anderson said in a recent interview that Angus told him he is at work on new AC/DC music and intends to have GUNS N’ ROSES frontman Axl Rose — who took Johnson‘s place on the road in 2016 — sing on the LP.

Slade also told Duke TV that it was all due to Axl that AC/DC broke out a number of rare cuts on the two legs of the tour Axl sang on, saying: “I was standing right next to [Axl] when he asked Angus, ‘Can we do these songs?’ And I love playing ‘Riff Raff’, and I always have… All those songs were great, and the fans loved them.”

Johnson was forced to leave AC/DC mid-tour due to a dangerous level of hearing loss, while Rudd was dismissed following a drug arrest and Williams decided to retire.

Angus has not said publicly what he has planned for the future of AC/DC. 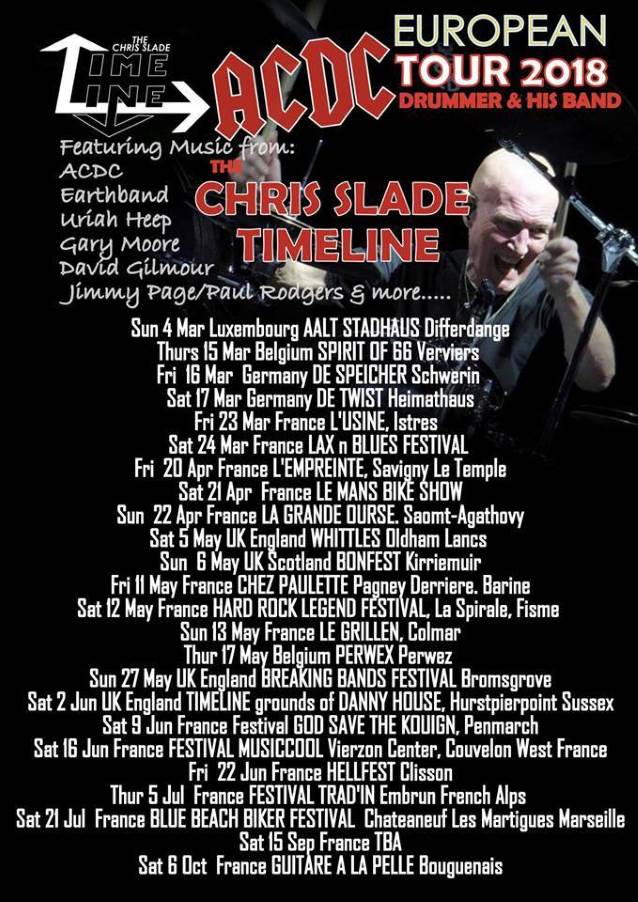