EXTREME Guitarist On Not Having Released New Album Since 2008: 'We're Disappointed In Ourselves'

AMBERIAN DAWN Releases Video For 'I'm The One'

Death metal defenders of the old GRUESOME have released the official video for the song “Inhumane”. The track is taken from the band’s second album, “Twisted Prayers”, which will be released on June 1 via Relapse Records. The clip was directed by Jeffrey Sisson (EXHUMED, ORIGIN) and can be seen below.

Said GRUESOME‘s Matt Harvey: “We’re very stoked about how this video turned out. Jeff Sisson really took the concept and ran with it, creating something new and unique, while still in the spirit of homage that GRUESOME is all about.

“This is the lead-off track for the record, and we feel like it really sets the tone for ‘Twisted Prayers’ — a blend of OSDM savagery and a bit of melody and flash to mix things up a bit.

“Play this at work to creep out your co-workers or on the bus home to get the person sitting next to you to fuck off!

“Thanks for checking it out, thanks to Jeff for putting this together, and as always thanks to Chuck and the boys for their legacy, which we continue to have a blast celebrating!”

GRUESOME has announced two exclusive concerts in Florida with labelmates EXHUMED before its European tour this summer in support of “Twisted Prayers”. The “Twisting Europe 2018” tour begins July 19 at Obscene Extreme in Trutnov, Czech Republic and ends August 12 at Alcatraz Open Air in Kortrijk, Belgium.

Less than four short years into its career, the members of GRUESOME have quickly made a name for themselves as not just torchbearers of DEATH‘s eternal legacy but as one of the most heralded bands in the scene today. After releasing a pair of acclaimed EPs, GRUESOME returns with “Twisted Prayers”. The new disc follows DEATH‘s paradigm shift during the “Spiritual Healing” era, incorporating more cerebral, melodic instrumentation with elements of thrash and thought-provoking, socially conscious lyrics.

Recorded with producer Jarrett Pritchard (EXHUMED, 1349, GOATWHORE) at New Constellation Studios in Orlando, Florida, “Twisted Prayers” features GRUESOME doing what they do best across eight songs and 40-plus minutes of unholy hymns with lurid melodies and vulgar atmospheres. The band has once again teamed up with the legendary Ed Repka (DEATH, ATHEIST, MASSACRE) for the album’s blasphemous cover art in addition to legendary DEATH guitarist James Murphy (DEATH, OBITUARY, TESTAMENT) for a pair of special guest guitar solos. 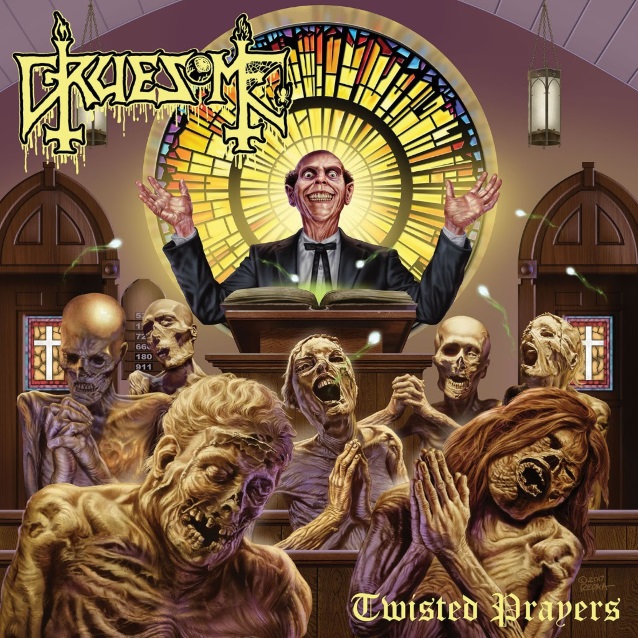