Two concerts by British heavy metal vocalist Blaze Bayley (IRON MAIDEN, WOLFSBANE) in Nancy, France will be professionally filmed and recorded for a DVD and CD release. The May 25 and May 25 gigs at the Chez Paulette pub will be very special evenings because the first night will see Blaze and his band play a setlist voted by fans, while the second night will be focused on the three albums of the “Infinite Entanglement” trilogy.

The 54-year-old Bayley, who was born in Birmingham, was the original frontman in WOLFSBANE, but left in 1994 to join MAIDEN. He recorded two studio albums with the Steve Harris-led group — 1995’s “The X Factor” and 1998’s “Virtual XI” — before Bruce Dickinson returned to the band.

The third album in Blaze‘s “Infinite Entanglement” trilogy was released on March 2. Titled “The Redemption Of William Black”, it is the tenth album of Blaze‘s solo career.

“The Redemption Of William Black” was co-written with Chris Appleton of fellow British metal band ABSOLVA. Chris, who also co-produced the album, is lead guitarist and backing vocalist in Blaze‘s band for recording and touring, together with his ABSOLVA bandmates Martin McNee (drums) and Karl Schramm (bass and backing vocals).

In a 2017 interview with Spain’s EMP Live, Blaze talked about the obstacles he faced while trying to become accepted by MAIDEN fans as Bruce‘s replacement.

“I think for all of us, if we fall in love with a band and we fall in love with a voice, it is very difficult to make an adjustment to a new voice,” he explained. “And for me, I had incredible support from thousands of fans all over the world. But there are some fans that hated me, hated my voice and they still do. And that’s okay, because it’s not for everyone.

“My style is very different to Bruce, and when [IRON MAIDEN] chose me to replace Bruce, I was very surprised because my voice is so different,” he continued. “But it is the most incredible job. As a heavy metal singer, it’s perhaps the number one job that you can have — to be the singer of IRON MAIDEN. So my passion and my heart was there, and the music that we made on ‘The X Factor’ and ‘Virtual XI’, which have been re-released now on vinyl, was incredible. And people that perhaps didn’t like the change at the time, now they go back and listen differently, with fresh ears, to the records and the music that we made then, and perhaps that’s why now I’ve become more popular than I ever was after IRON MAIDEN. Now, more than twenty years, people really start to take notice of what Blaze Bayley is doing.”

According to Blaze, his dismissal from MAIDEN in January 1999 came as a total shock, but he doesn’t believe the band was completely to blame for the decision. “The main reason that I was leaving IRON MAIDEN is because of EMI [MAIDEN‘s record label] and the business,” he said. “That is what I believe. At the time, BLACK SABBATH had the reunion with Ozzy [Osbourne], DEEP PURPLE had the original lineup with Ian Gillan reunion, and CD sales worldwire were going down. And I think the record company put a lot of pressure on the band to have a reunion. So, for me, it was a horrible time, but it is still a time I think of very fondly. And Steve Harris [IRON MAIDEN bassist] was really like a mentor to me and taught me so much about songwriting. So those values and the things that he taught me are things that I put into my own work now.”

Blaze also shot down speculation that there was bad blood between him and Dickinson, insisting that the two singers have always had an amiable relationship. “Bruce Dickinson and I have been friends before [I was in] IRON MAIDEN, and Bruce Dickinson was very supportive of me when I was in IRON MAIDEN and after IRON MAIDEN,” Blaze said. “When he had his own radio show, he helped me and played my music on his show. And my newest video, for ‘Escape Velocity’, was actually filmed at his aircraft simulator. So he had helped me a great deal.” 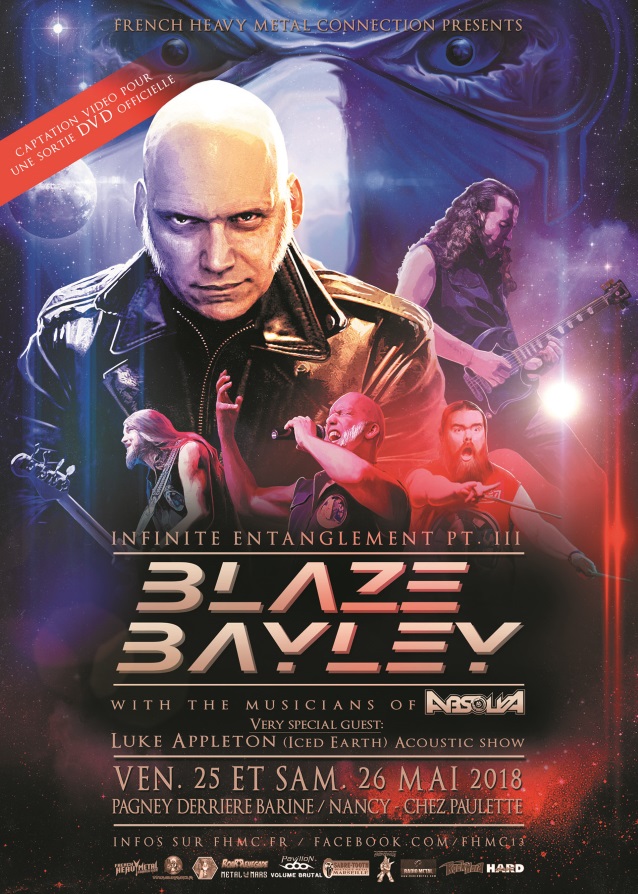