ANNIHILATOR Releases Music Video For 'For The Demented' Title Track

DRAGONFORCE's HERMAN LI On His Solo Guitar Instrumental Project: 'It's Gonna Be Fun'

Singer, songwriter, producer, performer, mother, teacher, rock ‘n’ roll legend… Lee Aaron is wearing a lot of hats these days. With a career spanning over 35 years and still going strong, Aaron is one of Canada’s most diverse artists and, as Billboard once described her, “an invincible voice.”

She proves it yet again on “Diamond Baby Blues”, out April 27. Aaron delivers a world-class vocal performance that may very well be the finest in her career.

She was one of the first women in Canada to navigate the male-dominated waters of rock ‘n’ roll, pioneering the way for a significant number of artists. Her 1989 album, “BodyRock”, was proclaimed by Chart magazine as “one of the 20 most influential Canadian albums of the ’80s, with artists like Avril Lavigne, Alanis Morissette and Shania Twain under Aaron‘s influence.”

Born in Belleville Ontario, Lee‘s family relocated to Winnipeg when she was two. Living two doors down from the MacLean family (MacLean & MacLean), Burton Cummings was a frequent visitor and Aaron‘s earliest musical memories were of the rehearsals and parties that occurred in that Dowling Avenue home throughout much of her early childhood.

Smitten by the music bug, after moving back to Ontario she studied voice and piano as a teenager as well as appearing in numerous musical theatre productions. At 15 she was invited to join a band in the Toronto suburbs. Initially playing saxophone and keys, by 17 she had evolved into the band’s lead singer and was discovered by local talent agent the summer she graduated school. Working with Canadian greats from MOXY, SANTERS and Rick Emmett, by 19 she had written and recorded her debut album, 1982’s “The Lee Aaron Project”.

Between 19 and 21, Aaron weathered a period that she today describes as “painful and embarrassing” in which she was subjected to overtly sexist marketing, exploitive photographs, emotionally uncomfortable stage wear and “being thrown into situations I had neither the self confidence, maturity or life experience to navigate.” As a result of this, the song “Metal Queen” was born. A response — not just to her own experience but the entire sexist culture of ’80s rock — the song was intended as a feminist statement of power and strength. Women were much more than the ornamental, eye candy depictions of the era, but strong and intelligent, in control and a force to be reckoned with. The song and subsequent video catapulted Aaron to iconic status with legions of fans around the globe and over the years has become an enduring anthem of empowerment for men and women alike.

The late ’80s and early ’90s brought radio hits, gold and multi-platinum sales with “BodyRock” and “Some Girls Do” (1991), multiple JUNO nominations and song writing awards. She appeared on the cover of dozens of magazines — even TV Guide! — and for several years seemed to be everywhere, her videos in near constant rotation on MuchMusic. Aaron turned the tables on the sexist status quo in her video for “Whatcha Do To My Body”, which featured a group of rugged, attractive men objectified in a tongue and cheek, yet respectful manner. This resonated deeply with the public and became a smash hit.

Recurrent themes in her writing — from teenager to maturity — have always been female empowerment and individualism, challenging the feminine stereotype and of course, love, in all its beauty and iniquity.

She re-emerged in 1998 performing blues and jazz in intimate venues around Vancouver, surprising fans and industry insiders alike with a musical left turn and released “Slick Chick” (2000) a spirited and soulful nod to her early influences. Despite initial skepticism, her authenticity and solid live performances from coast to coast led to credibility as one of the country’s most respected and versatile female vocalists and songwriters.

She followed up with the jazz-infused “Beautiful Things” (2004) but perhaps her most challenging career move to date was to become a wife and mother. Less than a month after completing the “Beautiful Things” tour, Lee and her husband welcomed a daughter in 2004 and a son in 2006. She took a recording hiatus to focus on her young family, but continued to perform selected live dates. She also released “Museum”, a collection of jazz performances on DVD in 2006; “Rarities, Studio & Live”, a 3-DVD career anthology in 2008; “Live In Sweden”, a DVD of her 2011 concert at Sweden Rock Festival; and a 30-year commemorative CD, “Radio Hitz And More”, in 2012.

During this time, Aaron returned college to expand on her post secondary education, acquiring a certification in specialized education. Working with exceptional youth in her community, she soon found herself helping design and implement programs for gifted children. “I’ve worked with differently-abled thinkers all my life… they’re called musicians!” she says. “Working with kids who learn in unconventional ways is intuitive work; just like music. When you find a teaching strategy that works — just like a song idea — the light bulb goes on and it’s magical.”

In 2016, Aaron catapulted back onto the scene with “Fire And Gasoline”, a stellar collection of rock originals. Canadian and European dates followed and video singles “Tom Boy”, “Fire And Gasoline” and “Bad Boyfriend” have well over 100,000 views on YouTube and continue to grow in popularity.

Last year brought multiple honors, with a permanent star on the Arts Walk Of Fame in her former hometown of Brampton, Ontario, her iconic “Metal Queen” and “BodyRock” outfits on display at The National Music Centre in Calgary and the “Back In The Spotlight” Fan’s Choice award from Music Express.

“Diamond Baby Blues” is a fiery collection of blues-based rockers, rock ‘n’ roll and hard-rock that pays homage to the giants of the late ’60s and ’70s music scene.

Set to perform at Wacken Open Air, Germany’s biggest open-air festival this summer, Sweden’s Skogsrojet and a string of Canadian shows, this multi-talented songstress shows no signs of slowing down anytime soon. 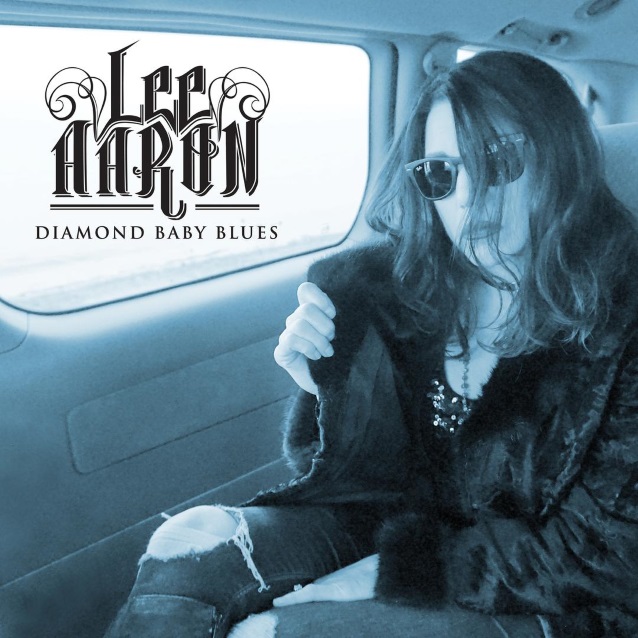