PHILIP ANSELMO To Undergo Another Back Surgery Next Week: 'I'll Be A New Man,' He Says

San Francisco Bay Area thrashers HATCHET have released a video for “Desire For Oppression”, the first single from their upcoming album, “Dying To Exist”, The disc will be released on June 22 via Combat Records, the relaunched imprint now run and operated by EMP Label Group, the U.S.-based label of MEGADETH bassist David Ellefson.

“Desire For Oppression” is also the leadoff track on the upcoming two-disc “Combat Bullets Vol 1.0” compilation, due in stores on April 6. In addition to the HATCHET cut, the collection features tracks from other Combat artists, including SWORD (Canada) , HELSTAR, DEAD BY WEDNESDAY, Marc Rizzo, WRATH, GREEN DEATH and THROW THE GOAT, plus over 25 of the best underground metal bands, as voted by fans, including CASKET ROBBERY, THE VENTING MACHINE, WHITE THRASH, ANIALATOR TX, JUDGEMENTAL, MIDNITE HELLION, AT HOME IN HELL, MYNAS, DIABOLOGY, A HANGING and FATAL MALADY.

HATCHET has launched the pre-order for “Dying To Exist” via CombatMerch.com, available on CD and LP, and in several bundle configurations.

Fueled by the twin guitar attack of vocalist Julz Ramos and Clayton Cagle, bassist Devin Reiche, and drummer Ben Smith, the HATCHET members have built a name and reputation for themselves carrying the torch of classic Bay Area metal, through three prior full-length releases of high-energy, intense thrash and countless tours supporting names like METAL CHURCH, FLOTSAM AND JETSAM, SOILWORK, WARBRINGER, ACT OF DEFIANCE, EXMORTUS, DOYLE, D.R.I. and more.

The follow-up to 2015’s “Fear Beyond Lunacy”, “Dying To Exist” promises to be the band’s heaviest and most focused release to date.

Combat was relaunched in 2017 by Ellefson and partner Thom Hazaert, with all releases manufactured and distributed by EMP Label Group via Amped in North America and SPV in Europe. 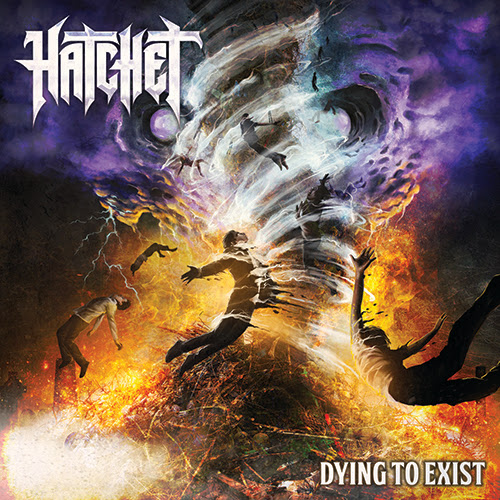