OPETH Leader Loves Not Knowing What Next Album Will Sound Like

Capital Chaos TV has uploaded video footage of ICED EARTH‘s March 7 performance at Ace Of Spades in Sacramento, California. Check it out below.

ICED EARTH is continuing to tour in support of its latest album, “Incorruptible”, which came out last June via Century Media. The cover artwork for the disc (as well as additional illustrations to every song) was created by David Newman-Stump from Skeleton Crew Tattoo (pencil illustrations) and Roy Young (colors).

Regarding how “Incorruptible” compares to previous ICED EARTH albums, guitarist and main songwriter Jon Schaffer told Metal Wani: “They’re all kind of their own thing, but I have a very strong gut feeling about this, and so does everybody in the band, that this is one of the really special ones. So I put it up there with ‘The Dark Saga’ [1996], ‘Something Wicked This Way Comes’ [1998], ‘Dystopia’ [2011] — it’s in that league of records — so it’s really gonna be something special, man. I know musicians always say that, but there is something going on here, so it’s cool. We’re all very excited about it.”

Asked if he is the leader of ICED EARTH and everyone else in the band takes cues from him or if they make joint decisions as a group about how to approach things, Schaffer said: “I am the leader of the band and [I’ve been] the driving force of the band since the very beginning. [But] that does not mean that I don’t take in the input of the guys on anything, you know what I mean? But as far as starting a cycle… I’m the chief songwriter, so… What I did, for instance, on [‘Incorruptible’], I talked to Stu [Block, ICED EARTH singer], and said, ‘Hey, you’ve gotta give me some lyrical themes of where you wanna go, titles, subject matter, whatever,’ because it’s my job to create the soundscape for that. And I knew where I was gonna go with the direction of the songs I was gonna write lyrically. And so he sent me some titles, and then whatever resonates with me, I’ve gotta be inspired by it in order to create that landscape that really is sort of like the soundtrack of a movie — it’s very, very important. And then the other guys will send me riff ideas, and if it’s fitting in and if it’s a cool part… Luke [Appleton, bass] wrote the majority of a song called ‘Defiance’ on this record. So it depends on the song and what the parts are doing, if they’re inspiring me and I run with it and go somewhere else or whatever — it can happen in all different ways — but definitely it starts here and I drive it the whole way through.” 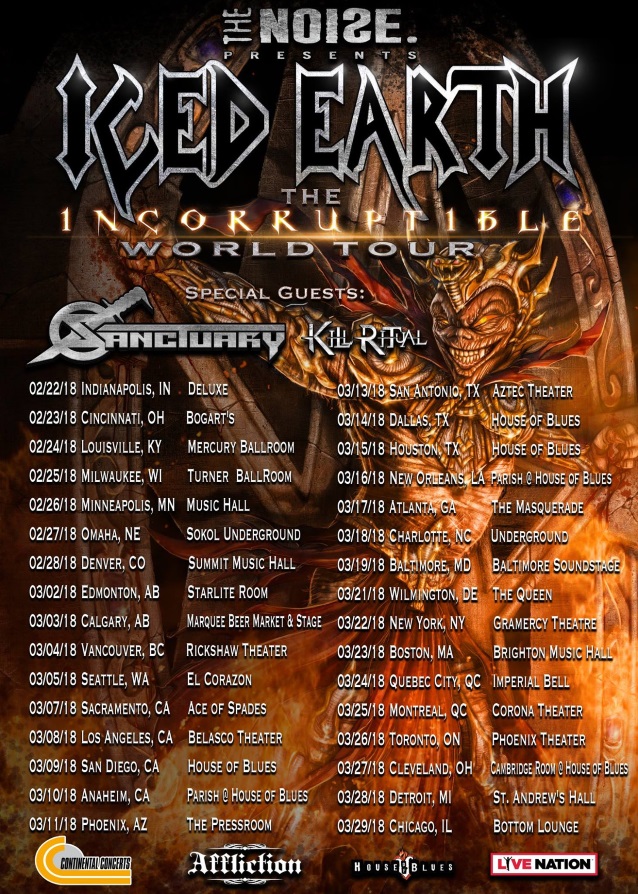