DOKKEN vocalist Don Dokken recently guested on the “Rock Talk With Mitch Lafon” podcast. The full conversation can be streamed below (interview starts around the 15:00 mark). A few excerpts follow (as transcribed by BLABBERMOUTH.NET):

On the 2016 reunion of the group’s classic lineup — Dokken, Jeff Pilson, George Lynch and Mick Brown:

Don: “It just happened to be timing. Jeff plays in FOREIGNER, and George has KXM and LYNCH MOB and other projects, and none of us could ever really get the four of us enough down time to commit ourselves to rehearsing, doing a show in America for a warm-up, going to Japan for a week and a half. We just couldn’t do it. The stars aligned, and we talked, and we noticed there was a window in October of [2016], so it happened.”

On how it felt to go from playing with DOKKEN‘s current lineup to sharing the stage once again with Lynch and Pilson:

Don: “It wasn’t like stepping back. We did play together a long time. We’re just older now. I’m used to my current lineup, and we’ve done a lot of records together, [but] stepping back, it wasn’t that difficult. We all get along fine these days, and all the stuff — whatever happened in the ’80s was a long time ago. It’s all water under the bridge.”

On the status of the new DOKKEN album he’s recording with the group’s current lineup:

Don: “Chris [McCarvill], Jon [Levin], Mick and I, we’re done, basically, writing. We have about 13 or 14 songs that are finished now. I’m just finishing up the lyrics, final lyric changes. We’re on tour constantly — we’re booked all the way to August — but we’re going to try to have a break. I think we’ve set aside three weeks in March or April where we’re going to go in cut the album. I’d like in the perfect world to have it out for mid-summer. We’re going old-school, classic sound. I thought about it; we talked about it. There’s been some departures and adventurous songwriting on [2012’s] ‘Broken Bones’ — a little [LED] ZEPPELIN feel, a little BEATLES feel — but I’m kind of going just to the way I wrote on all the other DOKKEN records, so it’s probably going to sound a bit classic DOKKEN-sounding.”

On whether he foresees additional DOKKEN shows featuring the group’s “classic lineup” in the future:

Don: “It’s not on the radar for me. I’m only focused on the current lineup and the next record, and I can’t think that far down the road. All I care about is putting out a new DOKKEN record with Jon Levin and Chris McCarvill and ‘Wild’ Mick Brown, and that’s going to be it. As far as reunion shows, I can’t imagine why Jeff would want to leave FOREIGNER. He’s got a great gig there. If we were going to do it, I think it would be obvious why we would do those shows — probably for the money. Those offers have been coming to me for years — like, crazy amounts of money to play. But I don’t have the desire right now. We did the Japan tour, 20 years later; we did a reunion; we did a video; we did a DVD; we wrote a new song, a couple remakes, acoustic. That should have to appease the fans until I decide what to do, but right now, I’m just going to focus on the next DOKKEN record. I’m sure everybody’s got a lot of stuff on their plate. George says maybe in 2019. We have a standing offer from Frontiers Records to do my next DOKKEN album and a DOKKEN original lineup record, but it’s way down the line. It’s not on my radar.”

Don: “What a happy accident. He was my attorney. [Laughs] How he got in the band was, I was just in the studio one day, working on a record, and Jon came down with some legal papers for me to sign or something. He had a suit and tie on. Jeff said he plays guitar, and I remembered he had [played] with Doro Pesch. I said, ‘Hey, would you like to burn some solos on this song for fun?’ He did, and I said, ‘Huh. You’re a really amazing guitar player,’ and the next thing you know, a year later, he came in the band.”

Don: “I felt pressured. Here I’d come out of this world-famous band, and now the band’s broken up. There were some legalities — I couldn’t use my last name. It was a legal issue. ‘Up From The Ashes’ should have been [released as] DOKKEN, but I couldn’t, so I had to call it Don Dokken. It wasn’t a solo album; it was just another incarnation of DOKKEN. It was a great album, but it’s timing. That album came out right when the whole grunge thing was hitting, and the musical styles were changing. I had done what I thought was a classic, straight-up rock and roll record, and I think we got a little stigmatized — ‘Oh, DOKKEN, ’80s guys, they’re a hair band.’ I hate that term, ‘hair band.’ So we kind of just couldn’t survive the change in taste. It did good — sold almost half a million copies — but it didn’t sell multi-platinum like the previous DOKKEN records, and the reason we didn’t continue was because I got despondent. I just felt like, ‘The hell with it.’ I put a lot of blood and sweat and tears into that record, and I just figured, ‘What’s the point?’ So I took a break. We all kind of went our separate ways.”

On where he sees himself in five years:

Don: “Probably retired, but then again, Chuck Berry was still performing at 92. Paul McCartney — what is he now, 75? Alice [Cooper] is 70. Mick Jagger‘s in his seventies. There’s a lot of people in their seventies. So, I can’t predict the future. We’ve all got to be grateful, with all the stupid things we all did — drugs, alcohol, riding my motorcycle at 120 miles an hour down the freeway, just assuming that the tire wasn’t going to blow out. I’m grateful to be here still.”

DOKKEN‘s classic lineup reunited in 2016 to play a handful of shows, some of which were recorded for the new live album/DVD/Blu-ray “Return To The East – Live 2016”, due April 20 via Frontiers Music Srl. The release includes a studio recording of a brand new song, “It’s Just Another Day” (the first DOKKEN track featuring the group’s classic lineup since 1997’s “Shadowlife”), as well as newly recorded acoustic reworkings of “Heaven Sent” and “Will The Sun Rise”.

Since completing the reunion dates, DOKKEN has continued to perform with the group’s current lineup, save for a handful of shows in late 2017 that saw Ira Black (LIZZY BORDEN, VICIOUS RUMORS) fill in for Levin. The group has scattered tour dates scheduled through the summer, including a performance at this year’s Wacken Open Air festival. 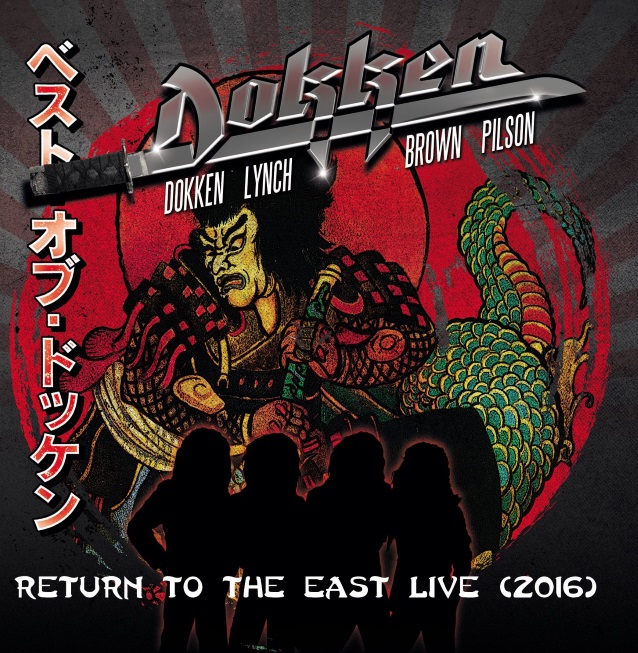