EXODUS To Tour Europe This Summer

The original lineup of Corby, U.K. metallers RAGING SPEEDHORN will reunite for a one-off show on October 6 at the Electric Ballroom in London. The news comes following on from a successful comeback started in 2014.

Since its reformation, the band has toured nationally and internationally, racking up appearances at every major metal festival in the U.K., and has released “Lost Ritual” in 2016. The band see this reunion as a celebration of its 20-year career.

Drummer Gordon Morison had this to say about the reunion: “Really happy to announce that we will be celebrating 20 years years of RAGING SPEEDHORN on October 6th at the amazing Electric Ballroom in London with the original band. This will never happen again, so if you want to see us smash London, go get your tickets now.”

Guitarist Gaz Smith, who left the band in 2008, will be returning with original guitarist Tony Loughlin and bassist Darren Smith.

Said Gaz about the show: “Starting RAGING SPEEDHORN with the guys 20 years ago changed my life completely. It was and still is a huge part of me. I’ve never really been one for going back, as far as playing music goes, but to celebrate the 20th anniversary with a special, absolutely one-off show was just too fun a thing to turn down. It’s going to be amazing. I can’t wait!”

Jim Palmer, guitarist for both CHARGER and SPEEDHORN‘s current line-up, had this to say: “We’re excited to be able to bring the Fuzzbastard that is CHARGER to this show. It’s gonna be a mega celebration of times gone by and I for one am looking forward to reliving all those memories for one night. We may even have a surprise to reveal for our lineup. Volume over talent!”

SPEEDHORN recently announced that it had signed with legendary British label Undergroove Records. A new seven-inch single is set for release later this year. The band i currently hard at work on their follow-up to “Lost Ritual”. 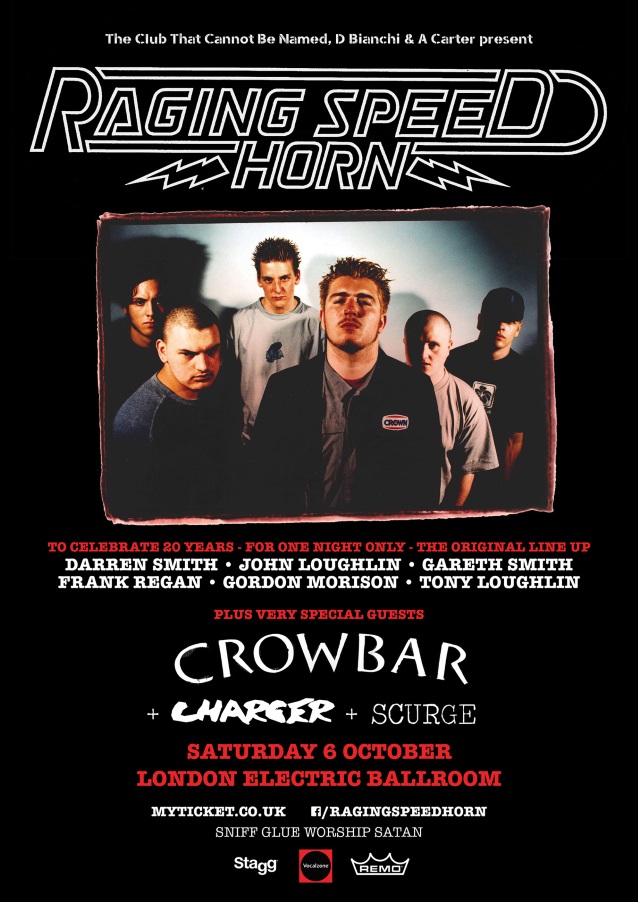