GODSMACK Frontman: 'I Feel Like There's A Lack Of True Bands Out There'

The award-winning feature documentary “Mind Over Matter” tells the unbelievable story of Brandon Mendenhall who was born with cerebral palsy, a neurological condition that affects movement, coordination and balance. It’s an incurable disorder, and one that could have greatly limited Mendenhall‘s life. But he had other plans. The film shows how Mendenhall worked strenuously to rehabilitate his hand, found mentorship with the members of the Grammy Award-winning band KORN and eventually formed THE MENDENHALL EXPERIMENT, a five-piece that has shared the stage with the likes of SUICIDE SILENCE, John 5, P.O.D., PRONG, SMILE EMPTY SOUL and FEAR FACTORY and released its debut eponymous EP in May 2017 on Lucent/Universal.

A great supporter of Mendenhall has been KORN guitarist James “Munky” Shaffer, who says: “[Brandon] is a big inspiration, not only for myself but for lots of people that not only want to get into music but that want to follow their dreams in anything.”

“Mind Over Matter” is directed by Sébastien Paquet, a French filmmaker behind the award-winning short film “Wounded Warriors” and critically acclaimed short doc “Korn And The Prodigy Son”, about the 12-year-old son of METALLICA bassist Robert Trujillo. “Mind Over Matter” is produced by Sean E. Demott (“American Satan”), Nate Adams (“24 Hour War”) and Shian Storm. Dillon Jordan (“As I AM: The Life And Times Of DJ AM”), Marco Vicini, Jordan Schur, Gregg Journigan, Daniel Wagner (“Miles Ahead”), Steve Kofsky and Russell Emanuel serve as executive producers.

The New York premiere of “Mind Over Matter” will be part of the 10th snnual ReelAbilities Film Festival, March 10-14, which takes place during National Disability Awareness Month.

'Mind Over Matter'
A young man with cerebral palsy overcomes a paralyzed left hand, bullies, and stereotypes, dreaming of becoming a rock guitarist even while told he will never succeed. His dreams become reality as he leads his own band, inspired by the band Korn to express himself through music.

Posted by Mind Over Matter Documentary on Friday, March 2, 2018 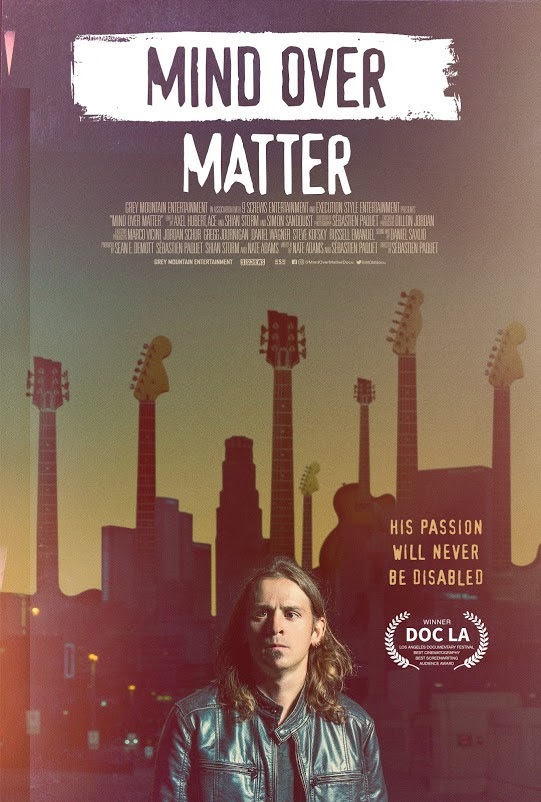