AVATAR Releases Music Video For 'The King Wants You'

Quality video footage of LAST IN LINE performing the DIO classic “Holy Diver” on March 3 at the Token Lounge in Westland, Michigan can be seen below (clip edited and produced by George S Pogacich).

LAST IN LINE recently put the finishing touches on the follow-up to its acclaimed 2016 debut album, “Heavy Crown”.

Drummer Vinny Appice, guitarist Vivian Campbell and bassist Jimmy Bain were part of the original DIO lineup which reunited in 2012 alongside singer Andrew Freeman to launch LAST IN LINE.

When LAST IN LINE formed, the intent was to celebrate Ronnie James Dio‘s early work by reuniting the members of the original DIO lineup. After playing shows that featured a setlist composed exclusively of material from the first three DIO albums, the band decided to move forward and create new music in a similar vein.

“We’ve all become really good friends,” Andrew told Q103. “It kind of started as a little bit of a tribute, in a sense. Those guys wanted to play the songs that they wrote. Vivian‘s been with DEF LEPPARD for over twenty years now. [Vivian, Vinny and Jimmy] hadn’t played together in really a long time, so they wanted to get back together and do something. So we started playing the old songs, and then it just turned into this other thing where we did a record [in 2016], and the record actually sold units and charted on Billboard. And it’s become a whole another thing now — it’s like a new original band that throws back, with an old catalog of big hits.”

Bassist Phil Soussan joined LAST IN LINE two years ago as the replacement for Bain, who passed away in January 2016 at the age of 68. He was reportedly suffering from lung cancer at the time of his death. 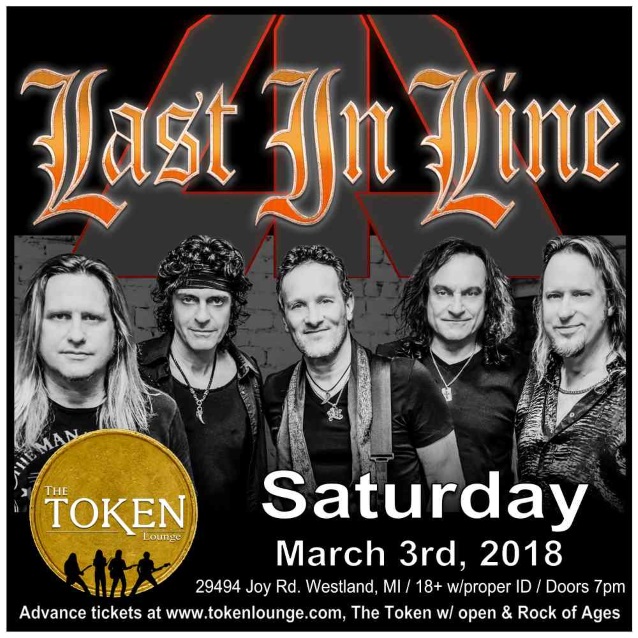