On February 26, Seattle metal legends SANCTUARY played at the Music Hall in Minneapolis, Minnesota as part of their North American tour with ICED EARTH.

Fan-filmed video footage of the “Die For My Sins” performance from the Minneapolis concert can be seen below.

These shows are acting as a tribute to the musical legacy of SANCTUARY singer Warrel Dane, who passed away last December. Guest vocals for SANCTUARY on the trek are being provided by Joseph Michael (WITHERFALL). Also joining the band on the road is second guitarist Joey Concepcion (ARMAGEDDON, THE ABSENCE).

Prior to the start of the ICED EARTH tour, SANCTUARY guitarist Lenny Rutledge said that the band “decided to continue on” with the shows “to pay tribute to our brother Warrel Dane.” He added that the set would “consist of many old and some newer songs performed with the utmost respect and quality to honor our friend” and invited fans to “join us in this farewell as we celebrate Warrel‘s musical legacy with SANCTUARY.”

A year ago, SANCTUARY released the official prequel to 1988’s classic debut “Refuge Denied”, “Inception”, which showcased several previously lost recordings from their 1986 studio session that have now been restored, remixed and remastered by Chris “Zeus” Harris (QUEENSRŸCHE). 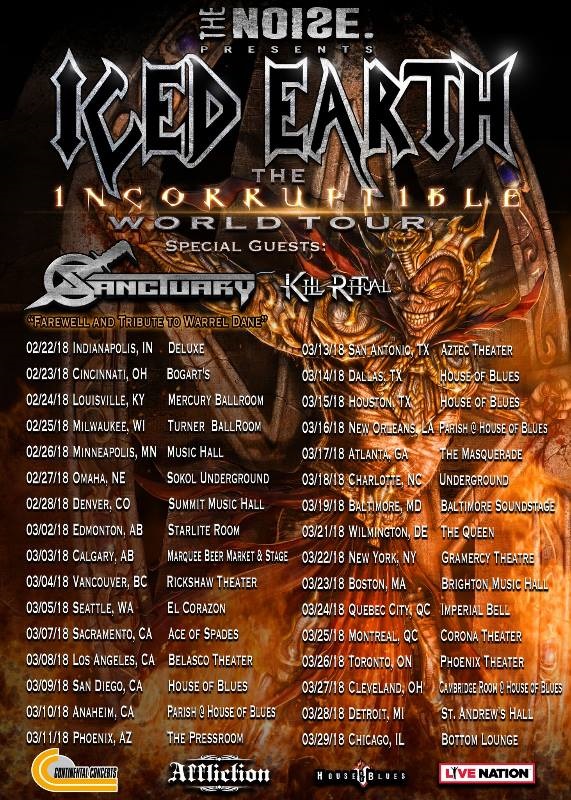