Dennis DeYoung has announced a special live tour celebrating the 40th anniversary of STYX‘s iconic 1977 album release, “The Grand Illusion”. DeYoung will reflect back on more than four decades of musical excellence throughout the performance. This includes performing the entire “Grand Illusion” album plus all the greatest hits written and sung by DeYoung, including “Come Sail Away”, “Babe”, “Mr. Roboto”, “The Best Of Times” and “Lady”. Other hit songs attendees may expect include fan favorites “Renegade”, “Blue Collar Man”, “Suite Madame Blue” and more.

The excitement of “The Grand Illusion 40th Anniversary Tour” is the magic of DeYoung‘s instantly recognizable voice bringing the classic STYX catalog to the live stage. For fans that weren’t witness to the original album tour, DeYoung shares: “‘The Grand Illusion’ album was STYX‘s greatest achievement, and this year my band and I will bring its sound and spirit to life nightly on concert stages across America.”

“The Grand Illusion” was STYX‘s seventh studio album, but historically serves as the album that would launch the band to super stardom with DeYoung‘s song “Come Sail Away” reaching No. 8 on Billboard’s Top 100 in 1977. The song pushed album sales to more than three million copies and gave STYX a multi-platinum album certification bringing STYX critical commercial success. The album remains a staple on classic rock radio stations worldwide.

Of “The Grand Illusion” album, DeYoung adds: “I formulated the theme behind ‘The Grand Illusion’ album after observing how American culture creates illusions through advertising and entertainment to convince us that our lives our lacking, in order to sell products. I told the audience that we were part of the Illusion and warned them not to be ‘fooled by the radio,’ which was us, and that in the end, despite the illusions and hype created, that ‘deep inside we’re all the same.'”

2018 offers opportunities for fans to see Dennis DeYoung and his band at a hometown venue. New dates are being added and ticket sales are available through DeYoung‘s official web site. 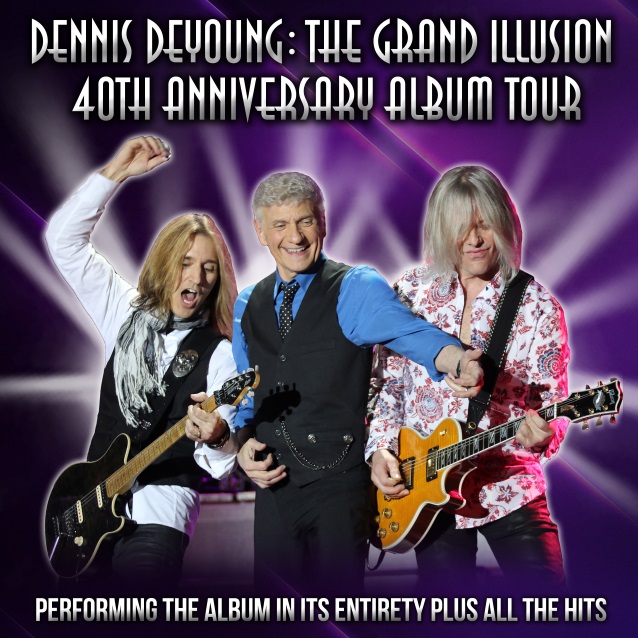