OBITUARY comments on the tour: “We are stoked about our North American tour and super excited to be back at the headlining spot.

“We have been very fortunate to be a part of some killer tours for our last few U.S./Canada runs as support to CARCASS, CANNIBAL CORPSE and KREATOR but that came with limits on time and production value. Now it’s time to bust out the Big Guns, dig deep into our musical pockets and pull out some oldies but goodies!!

“With 10 studio albums and over 100 songs in our catalog these days, it’s never easy choosing a set list and always causes some serious discussions and arguments amongst the band members, so we are turning to the fans on this one. We want to hear from YOU what songs we should play and since everyone has their favorites we are really looking forward to hearing what you guys think. This should be fun, entertaining and interesting, so make sure to comment on our social media pages with your top picks… Ready. Set. GO!!!!!!!!”

Prior to the North American tour, OBITUARY will embark on a month-long spring 2018 European headlining run in March. The trek begins March 3 in Cologne, Germany and ends April 1 in Schijndel, Netherlands at Paaspop festival.

After parting ways with Roadrunner following the release of 2005’s “Frozen In Time”, OBITUARY released two albums via Candlelight Records — 2007’s “Xecutioner’s Return” and 2009’s “Darkest Day” — before signing with Relapse Records in 2014. 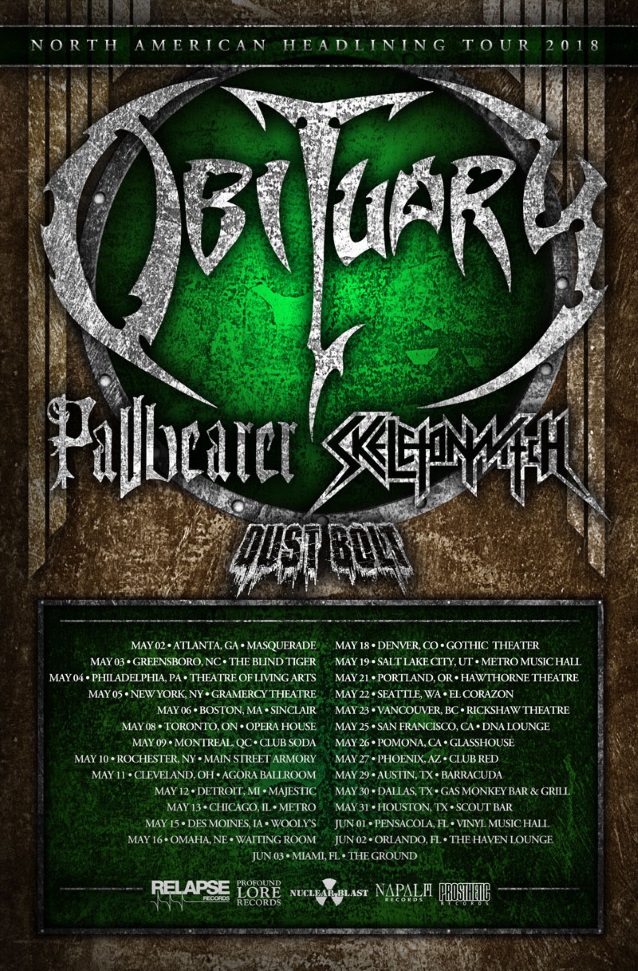