“From Out Of The Skies”, a brand new song from the BULLETBOYS, can be streamed below. The track is the title cut of the band’s new album, which will be released on March 23 via Frontiers Music Srl. The disc was recorded at the Dave Grohl‘s Studio 606 in Northridge, California.

Regarding the making of “From Out Of The Skies”, BULLETBOYS vocalist, guitarist, and founding member Marq Torien said: “Writing and recording ‘From Out Of The Skies’ was a humbling experience and recording this unpredictable album at the FOO FIGHTERS‘ Studio 606 was unbelievable and magical. Dave Grohl‘s music got me through a very difficult time, so from day one I knew that we were in the right home to record. I was privileged enough to use one of Dave‘s acoustic guitars to record with along with a hand-picked drum set by Taylor Hawkins. I appreciate the opportunity to record there.”

The BULLETBOYS began as a collection of talented musicians from high-profile bands such as KING KOBRA and RATT. Using their credentials, they were able to quickly capture the attention of music fans around the world while Torien emerged as one of the most underrated vocalists of the era.

The BULLETBOYS formed in 1988 at the very peak of the Los Angeles glam metal movement. With record companies constantly searching for new talent, they possessed a pedigree that most bands would kill for. Unlike the other glam rockers of the day, the BULLETBOYS were more hard rock and blues fusion than pure hair metal. Thanks to comparisons to the likes of AEROSMITH and especially VAN HALEN, talent scouts came running and the band quickly received their first major label contract. Over the years, they have dominated the airwaves, and remain relevant to this day in heavy rotation on VH1‘s “Metal Mania” and Internet (SiriusXM‘s Hair Nation, KNAC.COM) radio throughout the world.

“From Out Of The Skies” track listing:

The official music video for the disc’s first single, “D-Evil”, featuring guest vocals from Jesse Hughes of EAGLES OF DEATH METAL, can be seen below.

Torien stated about the track: “Jesse and I had an instant bond when we met and he did an outstanding job collaborating on the song with his vocals a welcome contribution.” 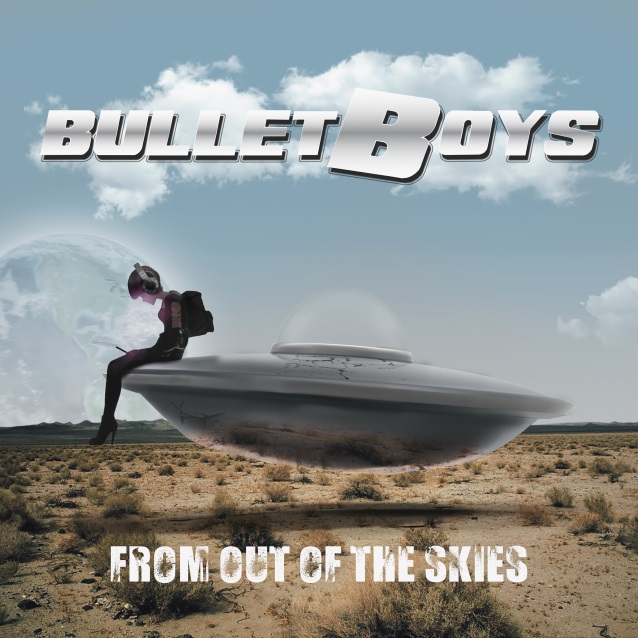