Acclaimed metal drummer Derek Roddy has joined FIRE FOR EFFECT, the new band featuring former members of MALEVOLENT CREATION. Roddy steps into FIRE FOR EFFECT as the replacement for Mike Smith (SUFFOCATION), who appeared on FIRE FOR EFFECT‘s demo.

Derek has played with HATE ETERNAL, NILE, MALEVOLENT CREATION, DIVINE EMPIRE, COUNCIL OF THE FALLEN (where he also handled guitar), TODAY IS THE DAY, TRAUMEDY and AURORA BOREALIS.

FIRE FOR EFFECT guitarist Gio Geraca recently said about Roddy‘s addition to the group: “Mike was great and we had a blast with him helping us make the FIRE FOR EFFECT demo, but truth is Mike never had long-term agreements or obligations with FIRE FOR EFFECT, and he has his own things going on, so we decided to give an old friend, Derek Roddy, a call and now we’re making the record with him. We thank Mike Smith; he will always be cool with us.”

Geraca added that the recording of FIRE FOR EFFECT‘s debut album was “going great mainly because we don’t have any time constrictions on us right now. We want to put out something we think could be memorable,” he said. “That, of course, remains to be seen but everyone is really passionate about this band and the songwriting process.”

According to Gio, he and FIRE FOR EFFECT singer Brett Hoffman “feel we have something to say and felt quite limited in our last band. [With] all the bullshit that surrounded us during that time, things got too serious and we kind of forgot and missed having fun again. Now with Eric Bukowski (guitar) and Derek Roddy in the picture, it’s like being 17 years old again writing music with your bros.” 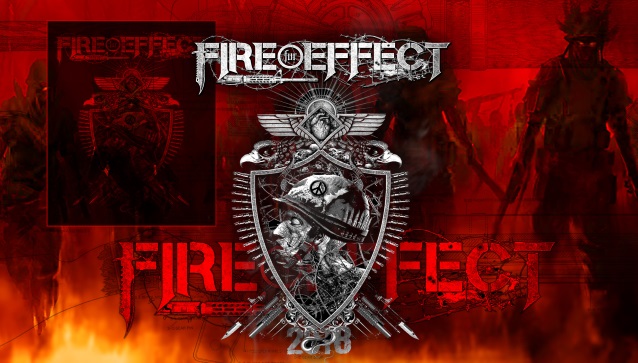