Connecticut hardcore/metal masters HATEBREED released their first full-length, the modern hardcore classic “Satisfaction Is The Death Of Desire”, back in November of 1997. The album set the tone for the type of moshable metal that would eventually go on to define the ’00s.

2002’s “Perseverance” was a perfectly executed, packed-with-anthems follow-up that has become emblematic of the era. In fact, the album’s iconic and lyrically uplifting track “I Will Be Heard” has become the band’s signature battle cry, securing its place as the quintessential, fist-in-the-air chant of the new millennium, thanks to a call-to-action that starts with “Now is the time for me to rise to my feet…”

In the 20 years since their definitive debut, the members of HATEBREED have rightfully earned their status as a hardcore legend. They have remained road warriors, touring constantly and reducing venues to pile of rubble and ash while sharing stages with everyone from SLIPKNOT to SLAYER and serving as one of the top-tier headliners on multiple festivals, from Ozzfest to Mayhem to Warped Tour.

HATEBREED embarked on a headline tour last fall, celebrating the 20 years of “Satisfaction Is The Death Of Desire” and the 15 years of “Perseverance”, playing a majority of songs from both albums, along with other fan favorites from across the entire HATEBREED catalogue.

The band is continuing the anniversary party with a spring 2018 leg of dates, featuring support from CROWBAR, THE ACACIA STRAIN and TWITCHING TONGUES.

“We had so many great times on the first leg of the tour that we decided to add another batch of dates with some more of our favorite bands to play with! See you soon,” said frontman Jamey Jasta.

VIP tickets and public onsales are set for Saturday, January 20. 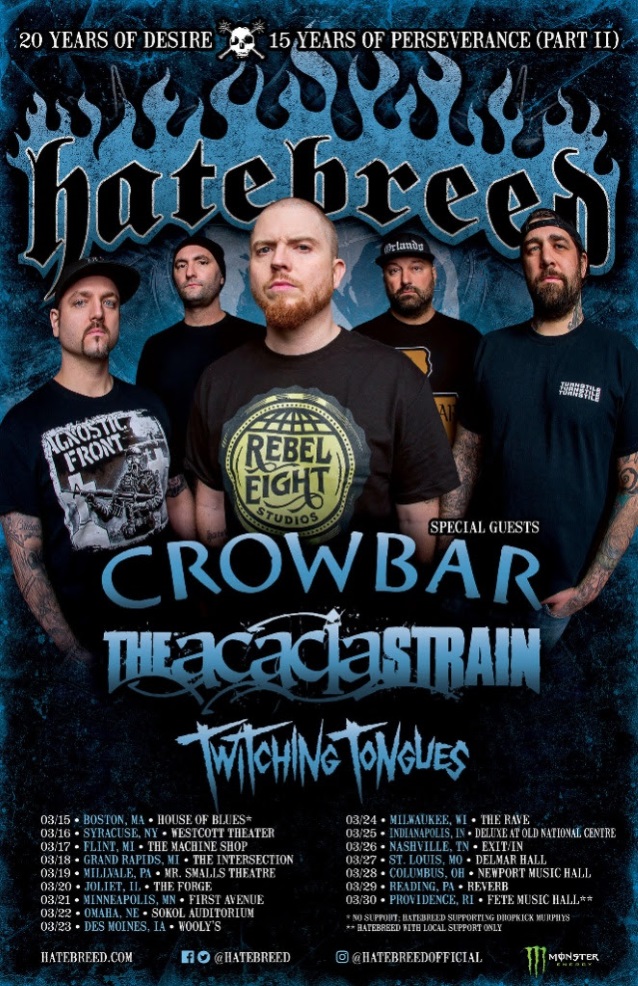