Track Premiere: Axia – ‘Fading Into Nothing’

Recorded live in November 2016 in various exotic Northern locales including Ottawa, Vancouver, Toronto, and Whitehorse Yukon, Canada, “Live, No Guff” is a collection of the DWARFS at their vertically challenged finest, powering through blistering performances of three decades of classic tracks, including “Stand Tall”, “Keep The Spirit Alive”, “Dirty Weapons”, “Heavy Mental Breakdown”, and more.

The cover art was created by Chris “Dwarf” Hale and can be seen below.

A teaser for “Live, No Guff” is available below.

EMP‘s Thom Hazaert says: “It came down to a lengthy bidding war between EMP, Monster Records Musik and Conglomerate Records, and thankfully we came out on top. So we opened Russ‘s crate, I held him down while David cut his finger open, and the deal was done. Now we own these guys for the rest of their natural-born lives, or at least until the end of 2022. Whichever comes first.”

He adds: “But really, no. I was talking to uber-Canadian journalist Mitch Lafon one day, and we got to talking about KILLER DWARFS, and he knew them (of course, he’s from Canada), and I asked about their current whereabouts. He put me in touch with Russ and the rest is history. I personally love the DWARFS and think they were one of the great underrated metal bands of the ’80s, and they are honestly still just as awesome today. We are super excited to own their asses for the next decade. JK. Now, back in the crate.” 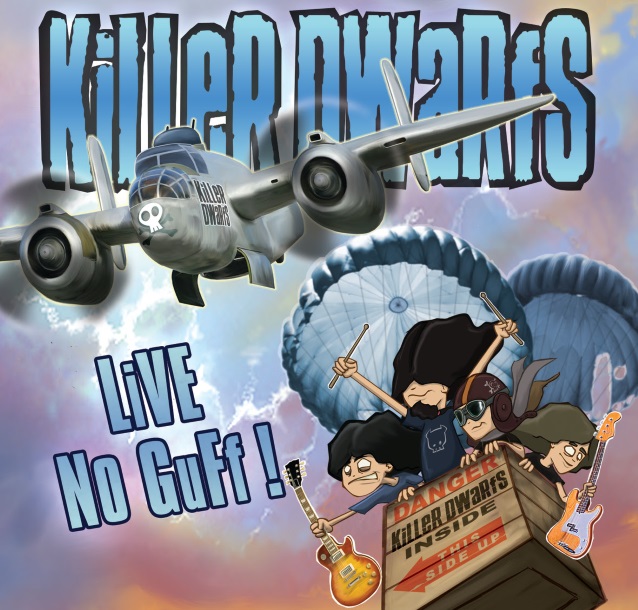