Track Premiere: Deathwhite ‘The Grace of the Dark’

ICED EARTH's JON SCHAFFER: 'I'm Not A Fan Of Censorship At All'

SLIPKNOT and STONE SOUR frontman Corey Taylor has confirmed that he has been separated from his wife for almost a year and just recently started a new relationship.

“Because ‘people’ want to gossip on my son’s Instagram, I’ll set the record straight, even tho some of you don’t deserve it,” Corey tweeted earlier today. “I’ve been separated for almost 10 months now. I started dating someone a couple months ago. My FRIENDS have known. Now YOU know. I’ll ask ONCE: DROP IT.”

Taylor‘s new girlfriend is rumored to be Alicia Dove, a professional dancer and a member of the all-girl dance group CHERRY BOMBS, which recently supported STONE SOUR. Neither Taylor nor Dove have publicly responded to the rumors.

Dove retweeted Corey‘s message earlier today and followed it up with the comment: “There. You got your facts. You happy?! #fuckouttahere”

Several hours earlier, Dove wrote: “2017 was all about transition. It was fun, it was tough, and it brought the best person in the world into my life. Looking back, I wouldn’t have changed one damn thing. I’m incredibly grateful.”

Back in April, Taylor spoke to Kilpop about meeting his current wife, Stephanie Luby. Asked if it was “love at first sight” for him, Corey said: “I knew that there was something… I knew that she… It wasn’t ’till we really started talking… Okay, let’s put it this way: When I saw her, I was knocked out, and I knew that I wanted to pursue her, and it took a little time. I had to gently tell her that I was flirting with her, ’cause she just wasn’t getting it. I was, like, ‘You realize I’m flirting with you like crazy?’ And she was, like, ‘Ahhhh…’ [But] I knew. Absolutely. And the more we talked, the more we really connected. And then it was… I found that I had about four days before the beginning of a tour — this was in 2008 — so I flew out to L.A. just to see her, and by the time I landed, we both had actually said ‘I love you’ to each other. And it was on. And we’ve been together ever since.”

Corey and Stephanie were married in November 2009 in Las Vegas inside the Palms hotel’s Pearl concert theater. The wedding party marched down the aisle to METALLICA‘s “For Whom The Bell Tolls” before more than 350 guests, including JANE’S ADDICTION‘s Dave Navarro and SUGAR RAY‘s Mark McGrath.

Taylor divorced Scarlett — whom he married on March 11, 2004 in a small ceremony at the Botanical center in Des Moines, Iowa — in early 2007. In the November 2008 issue of Revolver magazine, he was quoted as saying, “After I got sober, I realized my relationship wasn’t right for me. My wife and I had damaged each other too much.”

Because ‘people’ want to gossip on my son’s Instagram, I’ll set the record straight, even tho some of you don’t deserve it. I’ve been separated for almost 10 months now. I started dating someone a couple months ago. My FRIENDS have known. Now YOU know. I’ll ask ONCE:
DROP IT.
-CT 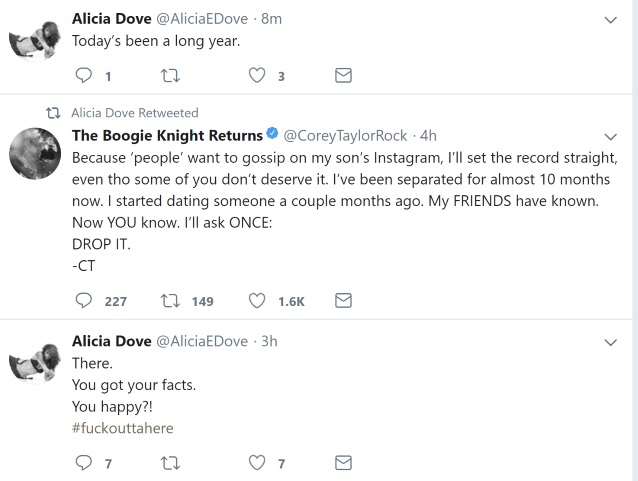