“It is with immense pleasure I can finally announce a European tour as the continuation of our ‘Blood Stained Earth Tour’ in support of our new album ‘Avé’, out on Nuclear Blast,” says Dolan. “Starting in the USA and through Canada, we continue through Europe. We have the great pleasure of joining forces with the incredible SUFFOCATION who I have admired and consider myself a great fan. This will be the show of shows; do not miss it! And as if they weren’t enough, I have invited the incredible NERVOSA from Brazil to also be a part of this. I promise you the bleeding we all do will be 100% METAL! See you soon and hold on to your fucking seats! AVÉ!”

More dates will be announced soon.

While unexpected at the outset, the end result of this reunion is an album that true VENOM fans will gladly add to the top of their playlists. Dolan says: “We tried to shape ‘Avé’ so that it comes at you dark, then it gets bright and heavy and just keeps growing into some kind of monster.”

The classic lineup of VENOM — Lant, Dunn and Bray — is often credited with kickstarting the whole black metal movement, but is more accurately seen an early example of extreme metal. 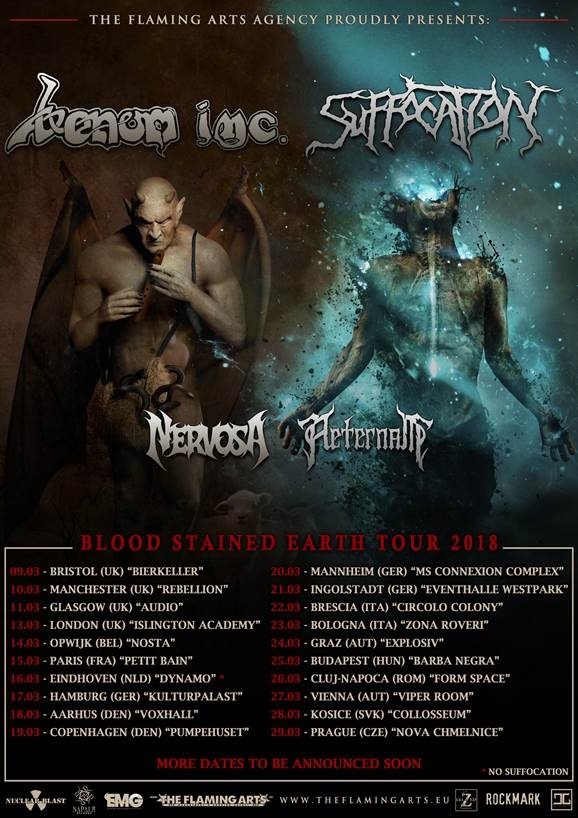