SEETHER Releases Video For Acoustic Version Of 'Against The Wall'

MANOWAR has been forced to cancel its two concerts in Stuttgart, Germany because bassist Joey DeMaio has taken ill.

“Unfortunately, due to food poisoning and dehydration, Joey DeMaio is under doctor’s care and has been ordered not to travel or perform at this time,” MANOWAR said in a statement. “Therefore the last two shows of the ‘Final Battle’ world tour 2017 will be rescheduled.

“Joey is expected to make a full recovery and with proper rest and treatment, he will be back to lead the battle once again.

“Fans with tickets for the Stuttgart shows on December 15 and 16, 2017, please be patient and hold on to your tickets while we work to reschedule these shows as soon as possible.”

The New York-based veteran metal act announced in May 2016 that it would call it quits after one last tour, explaining that its most recent trek — “Gods And Kings” — was a groundbreaking moment in the band’s career and the group aimed to go out on a high.

MANOWAR frontman Eric Adams, whose real name is Lou Marullo, spoke about the group’s’s final trek in a recent interview with “Outdoor Adventures With Jayson”. The 63-year-old singer admitted that it was “kind of a Catch-22 thing” knowing that he would never perform with MANOWAR again. “I’m gonna miss the big stage — of course I am — but all good things have to come to an end at some point,” he said.

As for his future plans, Adams said: “MANOWAR has decided to call it a day, and who knows what’s gonna happen after that? I might continue to sing. I might just grab my bow and get out in the woods a little more often than I did before. But we’ll see. The future’s still yet to be told.”

MANOWAR‘s most recent studio effort was 2014’s re-recording of the band’s 1988 album “Kings Of Metal”.

DeMaio will embark on “The Blood Of The Kings” spoken-word tour in November 2019. 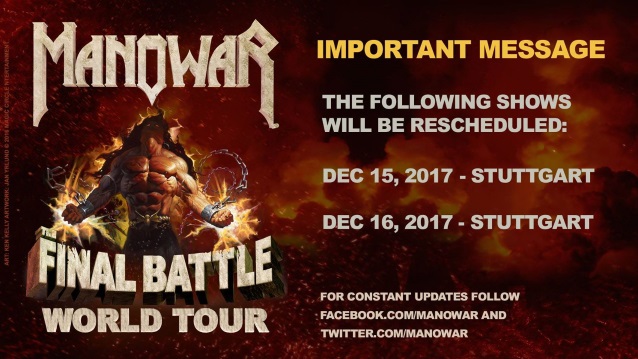