MINISTRY's AL JOURGENSEN On DONALD TRUMP: 'I Predict He's Going Down This Year'

FIVE FINGER DEATH PUNCH was joined by IN THIS MOMENT singer Maria Brink for a performance of the song “The Bleeding” at the Rock Allegiance festival on October 7 at the BB&T Pavilion in Camden, New Jersey. Fan-filmed video footage of her appearance can be seen below.

In introducing Maria to the crowd, FIVE FINGER DEATH PUNCH singer Ivan Moody said: “Through the years, I got to know somebody on a whole different level, personal. A very, very close friend of mine and one of the most beautiful in the entire fucking metal world: the madam of mayhem… if you will, Maria Brink from IN THIS MOMENT.”

As previously reported, FIVE FINGER DEATH PUNCH has already completed its seventh studio effort and is still waiting to get a release date for it, nearly one year after the disc was finished.

FIVE FINGER DEATH PUNCH guitarist Zoltan Bathory gave The Pulse Of Radio an update on where the new album is at. “I think we have about eighteen songs, nineteen songs on deck and right now we are… You know, we will figure out if a greatest-hits [collection] comes first or the record comes first. But we have a lot of songs and there are a couple of massive ones that I’m really proud of, that I know that they will touch a lot of people.”

FIVE FINGER DEATH PUNCH guitarist Jason Hook told Detroit radio station WRIF that the set turned out “killer,” adding, “Some of the stuff will be right in line with what people want and expect from the band, and then some of it, again, we took some chances, tried to branch out a little bit to see if it would work, and some of that stuff wound up on the record.”

The band delivered the new LP to its current label, Prospect Park, several months ago, but a legal battle with the company has delayed its arrival.

The band filed a lawsuit against Prospect Park in April, asking a judge to release them from their contract and order the company to pay over a million dollars in damages.

The label sued FIVE FINGER DEATH PUNCH in 2016 for breach of contract, alleging that the group wanted to rush the recording of a new album. The band signed a new North American recording deal with Rise Records last year.

The group has also dealt with Moody‘s struggles with substance abuse, which forced him to miss a number of shows last year and this past spring. 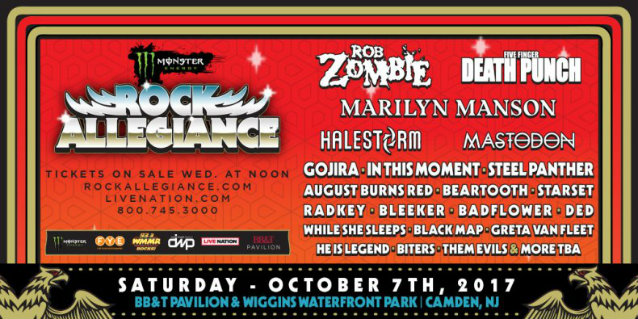