Former MEGADETH and current ACT OF DEFIANCE drummer Shawn Drover was recently interviewed by RockBoy Radio. You can now listen to the chat below.

Speaking about the differences between touring with a veteran act like MEGADETH and an up-and-coming group like ACT OF DEFIANCE, Shawn said: “Well, everything’s scaled down. We could get the big luxury bus if we wanted to, but when you get that bill at the end of the day, it’s not a fun thing to pay. Do you wanna go home owing your ass? That’s not something we’re interested in. So everything’s scaled down.

“To me, personally, I don’t care,” he continued. “That’s not what that was about. I was in [MEGADETH] because I loved the music; I didn’t care about being a rock star or any of that stuff. It was all icing on the cake, and it was a great experience and I loved it all and I enjoyed it for over ten years. But at the end of the day, I was in that band because of the music, because I was a psycho fan of ‘Peace Sells’ and ‘Killing Is My Business’; those records were part of my metal upbringing, and I still love those records. My reasons for joining that band were purely musical. Some of the stuff I thought was great, some of it I couldn’t care for.”

Drover added: “It’s not important for me to stay at a five-star hotel and all that stuff. It’s cool and I appreciated it, but it wasn’t necessary for me. The show is what I cared about — the music and getting out there in people’s faces and doing the best that I could do. So as long as I can travel comfortably and get from place to place, I’m all good. It’s all about the show for me, it’s all about playing this music for the people who like this music, and that’s why I became a musician. It’s never changed.

“I’ve been doing this for years and years and years now, and my perspective has never been altered. I never got caught up in all the horseshit — chicks, drugs and all that kind of garbage — I never cared about that stuff. I got married at a very young age and had kids and kind of went the other way. I was definitely the exception to the rule — certainly in terms of percentage, how many people had a little more debauchery in their life certainly than I did. And not to douche it, ’cause I love reading all those novels of people just completely whacked on drugs and all the horrible, crazy things that happen. But I prefer to read it in a book than to experience it. So I didn’t once ever get involved in all that stuff. I was purely there for the music, and it’s always been like that for me.”

Asked if he learned to conduct himself professionally while a member of MEGADETH or if he developed those skills on his own prior to joining the Dave Mustaine-fronted outfit, Drover said: “Probably both. I was definitely an apt pupil in that band. I was observant [about] how to conduct myself. I pretty much knew going in, but I learned a lot of stuff along the way in that band as well, and all the good things I took to heart. I wanted to present myself in a professional manner.

“That band was not… the whole chicks and guns and firetrucks and all that ’80s cheese stuff,” he continued. “And I’m not douching that stuff, ’cause I loved a lot of that stuff too back in the day, but my previous band, it wasn’t like that; it was a very serious kind of thing. But I would have conducted myself the same way in another band anyway. I didn’t change my demeanor or anything; I learned stuff. There’s no video of me stumbling-ass drunk somewhere on stage or whatever, so I kept my crap together pretty good, for the most part.”

Drover quit MEGADETH in November 2014 “to pursue [his] own musical interests.” Later that same day, MEGADETH guitarist Chris Broderick announced his departure from the group, saying that he was exiting the band “due to artistic and musical differences.” The duo has since launched a new act called ACT OF DEFIANCE with ex-SCAR THE MARTYR singer Henry Derek Bonner and bassist Matt Bachand (SHADOWS FALL).

ACT OF DEFIANCE‘s sophomore album, “Old Scars, New Wounds”, was released on September 29 via Metal Blade Records. The follow-up to 2015’s “Birth And The Burial” was mixed by Dave Otero, who has previously worked with CEPHALIC CARNAGE and CATTLE DECAPITATION, among others. The cover artwork was created by Travis Smith (KING DIAMOND, OPETH, AVENGED SEVENFOLD, STRAPPING YOUNG LAD). 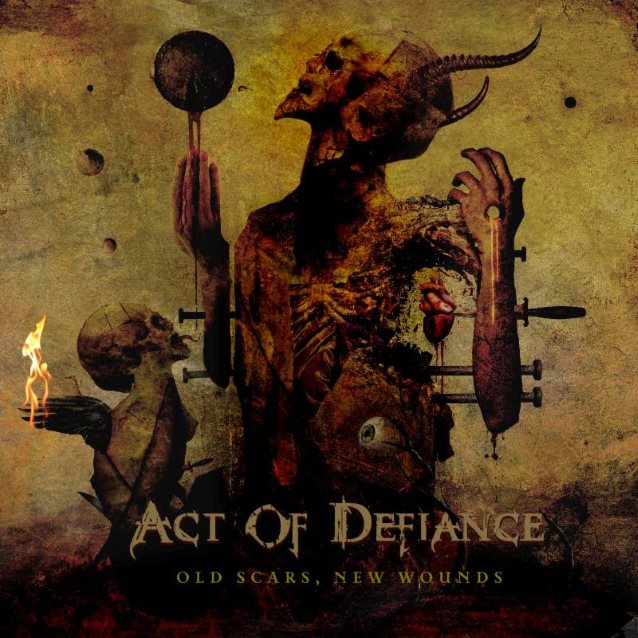