“Blast Frozen”, the new video from Chicago death metallers BROKEN HOPE, can be seen below. The clip was filmed at the Underworld in London, England.

“Blast Frozen” is taken from BROKEN HOPE‘s seventh studio album, “Mutilated And Assimilated”, which was released in June via Century Media Records. The disc was produced by Scott Creekmore and features artwork by Wes Benscoter.

BROKEN HOPE guitarist Jeremy Wagner stated about the follow-up to 2013’s “Omen Of Disease”: “BROKEN HOPE studio album number seven?! Un-fucking-believable! I’m floored at how amazing our new album turned out. The songs are relentless and violent and dark and heavy — and all from a fresh and ferocious place we haven’t shared before. Moreover, thanks to my new studio and the stellar work of engineering/producing Jedi — Scott Creekmore — the production is on a sonic level like we’ve never had in our career.

“For me personally, I feel ‘Mutilated And Assimilated’ is my own finest hour as a guitarist and lyricist since I formed this band as teenager. I’ve never felt this inspired before. The album has my strongest riffage to date, it also has Leski riffage on a few songs, it has my best friends on it, and in a crazy twist, I used Jeff Hanneman‘s guitars to write the album with and used them to track with in honor of his influence on myself and the world of metal.” 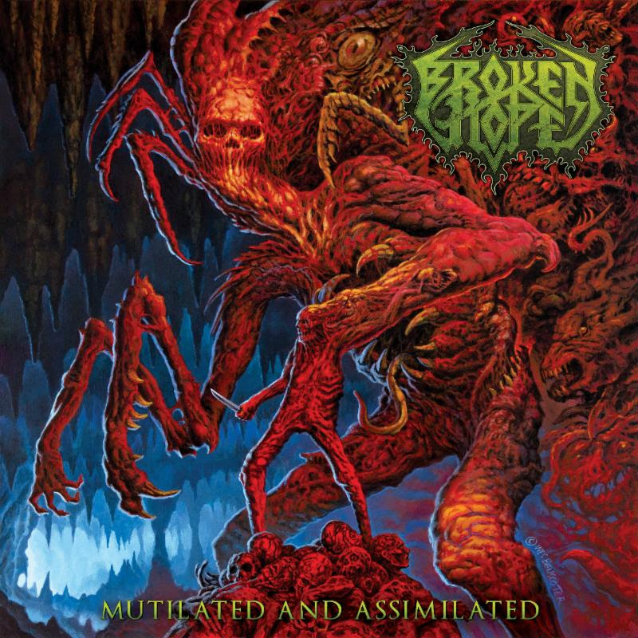