AVENGED SEVENFOLD Singer On 'The Stage' Surprise Release: 'We Were Just Looking For Ways To Stimulate Ourselves'

SLASH On Possibility Of New GUNS N' ROSES Music: 'I Think Everybody Wants To Do It'

GLENN HUGHES On BLACK COUNTRY COMMUNION: 'I'd Love To Tell You It Was More Than A Side Project, But That's All It Is'

“Masquerade Of Madness”, a brand new song from KING DIAMOND, can be streamed below. The track will appear on KING DIAMOND‘s first studio album in 12 years, “The Institute”, which will be released in 2020 via Metal Blade Records.

This past March, King Diamond told Full Metal Jackie‘s nationally syndicated radio show that the next album from his namesake band will be “absolutely gruesome. The storyline is… well, it’s in a way where I can’t even put it into just one album,” he said. “So, it has to be over two albums. And it’s really planned out to work in a very special way with the show as well. So the show is being built right now in Denmark and it’s built around that story, so that it really can go hand in hand. Right now, I already know how the production will develop for the next tour, after this tour, so that when we do part two of that story, I know how the whole thing ends, of course, already, and I know how the production is gonna change and how it’s gonna be culminating in one very, very big thing. So it’s a long project, several years. Actually, the next three years are gonna be very, very intense for us. There is a lot of things that is in the planning. Also, after we signed up with 5B [artist] management, a lot of good stuff is coming out of that, piece by piece. We are getting a plan that is gonna be amazing for our fans for the next three years — something that’s gonna come that they would not expect, I think. So some very, very cool prospects.

“[The album] has something to do with parallel worlds and punishment, and other stuff like that. You’ll see us torture our dear little Abigail on stage. It’s part of the story; you’ll see it. But it’s great to be here enjoying life. And [my son] Byron, it’s been almost two years now [since he was born], and it’s incredible. But it hasn’t changed me very much when it comes to what I stand for and the stories that’s coming and the musical style that’s coming. It’s total, utter KING DIAMOND.”

KING DIAMOND‘s next album is said to be a story set in a 1920s mental institution. “I chose that because I think it’s a very creepy scenario,” King told Full Metal Jackie. “And the thing is that I know that somebody has talked about that, but that’s not the setting, actually. There’s a lot of other things involved, but the setting looks as if it was a 1920s asylum — that’s exactly what it looks like. And some of the things that go on that we’re gonna show onstage is also things that certainly was going on back then, when medicine was beginning to take a beneficial turn in history and actually being able to help human beings live longer. But there was some experimentation going on, too, that was absolutely gruesome. Some of that is involved in the story, but it’s something totally different. Once you get to the second part of the story, you will begin to suddenly understand that, ‘What the hell is going on here? What is this really about?’ ‘Cause there’s a whole different story that will not come to you till second part. But in the first part, you’re gonna get to know a lot people at a certain place.

“Instead of telling the story — it’s way too much — but some of it takes place here, this world, and some of it takes place in a parallel world. And there’s a correlation between what happened to me and what happens to some people in this place and where they suddenly appear. And you will find out why they are there, how they appear there and the places down the road. I won’t say too much right now, but it’s gonna be very creepy.”

KING DIAMOND received a Grammy nomination in the “Best Metal Performance” category for the track “Never Ending Hill” off the band’s last album, 2007’s “Give Me Your Soul … Please”.

“Give Me Your Soul … Please” sold 4,500 copies in the United States in its first week of release to debut at position No. 174 on The Billboard 200 chart. 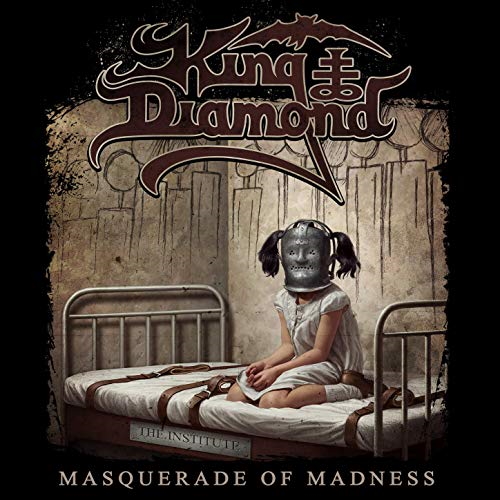