Rights To 130 JUDAS PRIEST Songs Up For Sale After K.K. DOWNING's Golf Dream Comes To An End

March of 2018 saw the release of the latest MONSTER MAGNET masterpiece “Mindfucker” on Napalm Records. Following three exclusive Northeastern U.S. shows, the band headed across the pond for a European headline tour. Now they are ready to return to North America for a full headline tour this fall.

The band will hit the road in North America on September 28 in Toronto, Ontario. The tour will run through October 28 in Boston, Massachusetts. Support on the tour will come from ELECTRIC CITIZEN and DARK SKY CHOIR. A complete list of dates can be found below.

A message from MONSTER MAGNET frontman Dave Wyndorf: “Can’t wait to hit North America with the ‘Mindfucker’ tour! Warning: This is REAL ROCK music, made loud to be played loud! A MONSTER MAGNET show is a face melting celebration of electric madness made all the better and fueled to peak intensity by the attendance of excitable human beings. Hope you’re part of that equation! See you soon!”

Dave Wyndorf told Big Music Geek in a recent interview that the title of MONSTER MAGNET‘s latest album, “Mindfucker”, was inspired by the current political situation in the United States.

“‘Mindfucker’ was one of my favorite words when I was a kid,” Wyndorf said. “For this record, I was, like, ‘Well, it’s 2018 and I’m in a rock band. Why wouldn’t somebody call a record ‘Mindfucker’?’ It’s perfect for me because I’ve been mindfucked since the [U.S. presidential] election [in 2016], ya know? But that’s the state of the 21st Century right now. It’s pretty much a mindfuck to me. It’s both fascinating and scary and it sounds so cool. It’s ‘Beavis And Butt-Head’-ish and it’s really, really simple, but I wanted to have something butt-ass simple to say, so I just said to myself, ‘If I don’t do it now, I’ll never do it’. It’s stupid and it’s juvenile, but it’s also really cool. If somebody doesn’t play it, because they can’t reference the title… It’s the title of the album, but there’s no reason why they couldn’t play other songs. It didn’t scare me to take the risk of not being let in a couple of other doors, so I was, like, ‘Wow, man. You have to call it ‘Mindfucker’.'”

He added: “I don’t think we’re doing anything in particular except living through one of the biggest mindfucks you could possibly live through. It’s totally jaw-dropping. It’s, like, ‘Really? Are people really that stupid? Are they really as stupid as we thought they were? As it turns out, yes they are.”

Wyndorf spoke in greater detail about the inspiration for the “Mindfucker” title during a separate interview with Icon Vs. Icon. He said: “When it came time to write the lyrics, it was after the last election went down and [Donald] Trump was elected. We kind of watched the information age flip. Now it’s, like, ‘Fuck! There are a million ways to lie and people are taking advantage of it!’ It’s almost like it’s okay to lie now. [Laughs] ‘Fuck it! We’re just gonna make shit up every day!’ [Laughs]”

He continued: “Within six months of the time he got elected to now, the whole nature of how people pay attention to information has changed.

“I don’t know how many people are into the whole Trump thing, but I truly can’t believe that the whole rest of the world and the rest of America are just sitting back, sticking their fingers down their throats and saying, ‘Gag me. This is bullshit. This is just total horseshit. It’s a giant man-baby just bullshitting. He doesn’t know what he’s doing and there’s nobody at the wheel.’ Meanwhile, the news outlets are going crazy and fighting each other! It’s a total mindfuck! It really is. [Laughs] It’s, like, ‘Wow! You really can get away with anything!’ That’s what I was stuck with. The week that he got elected, I was, like, ‘Really? This is the time I was going to write my sex, drugs and rock ‘n’ roll record?’ I just couldn’t keep it out of my head. I didn’t want to be RAGE AGAINST THE MACHINE either. I didn’t want to go in there and be some super, super political, as if I know what I’m talking about. I didn’t want to get too moral about it either.

Wyndorf added: “These days I don’t think I should actually have to teach people how to be a good person, you know? It’s pretty fuckin’ obvious. Be fair. [Laughs] I didn’t want to be too politically incorrect either because I’m not that way. I’m too cynical. I just couldn’t keep it out of my head, so I wrote songs and tried to go along with the sex-drugs-and-rock-and-roll thing. I tried to write songs about girlfriends and things like that, but the creeping paranoia of 2018 was there. It crept and it found its way into all of these lyrics. I found myself looking at lyrics that included the word ‘brain’ like a million times! My aching fucking brain! [Laughs] ‘Lie’ was a word that was in there a lot too. It got a little weird. In the end, it is what it is. It’s an honest document of a guy sitting in his kitchen in January of 2018 going, ‘What the fuck?’ Basically, that’s it, and it’s all I can hope for. Like I said, I didn’t want to get into it with this, but I had to deal with it.” 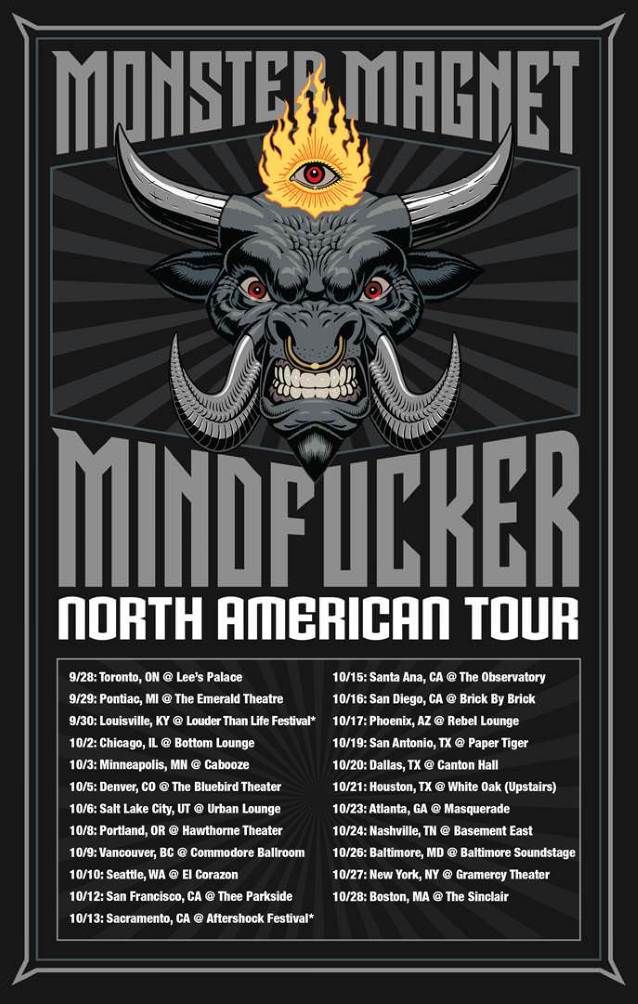