DELAIN Is Planning To Release Next Studio Album In 2019

HALESTORM Bassist On Upcoming Album: 'It's The Best Stuff We've Ever Done'

Fan-filmed video footage of ACCEPT‘s June 9 performance at the South Park festival in Tampere, Finland can be seen below.

ACCEPT is continuing to tour in support of its latest album, “The Rise Of Chaos”, which was released last August via Nuclear Blast. The cover artwork for the disc was created by the Hungarian artist Gyula Havancsák.

Asked how ACCEPT chooses songs for its concert setlists this late into the band’s career, guitarist Wolf Hoffmann told journalist Janne Vuorela: “I think we play more new songs than you might expect. Some bands just pick one or two new songs off their current album then focus on all the old stuff. In our case, we play five new songs and a lot of the material from the last four albums with [vocalist] Mark Tornillo. So, the ‘new era,’ if I can call it that and about 40 or 50 percent of older stuff. It’s really a pretty good balance from what people have told me. They will be pleased.”

Wolf went on to describe “The Rise Of Chaos” as “probably another classic ACCEPT album. I don’t think it’s any different from the previous three that we’ve done and it wasn’t supposed to be any different,” he said. “It was supposed to be better than ever. A lot of times when we go into the studio, that’s our goal: We want to make songs that feel familiar but are new. They should be totally in the tradition of what we’ve been doing all these years. They should feel and sound like it was something that we could have written all these years ago but never did. That sounds like a very simple concept, by the way, but it’s not that easy to really pull off. That’s why sometimes you have to throw a lot of songs away and start again. Songwriting doesn’t get easier with the more albums you’ve done. A lot of people would probably say the same after you’ve done so many albums, released so many songs, you have to challenge yourself to come up with something that you can still follow-up with all that stuff. It doesn’t get easier with time, but I think we pulled it off quite well.”

ACCEPT singer Mark Tornillo, who joined the group in 2009, told Metal Shock Finland that he isn’t bothered by the fact that some of the band’s fans have yet to embrace him. “Everybody is entitled to their opinion,” he said. “I’m a purist too with certain things. I get it. But I think we’ve moved on. We’re almost a different band at this point. We really are a different band at this point. We still pay tribute to the old ACCEPT by playing the old songs — I mean, we have the two people that wrote most of the songs, [so] we have to. That’s always going to be part of ACCEPT‘s history. You can’t change it. All we can change is the future. But everyone’s entitled to their opinion, and I get it. I wish them all well, and I wish [former ACCEPT singer] Udo [Dirkschneider] well, and his band, you know. No hard feelings on my part, that’s for sure.” 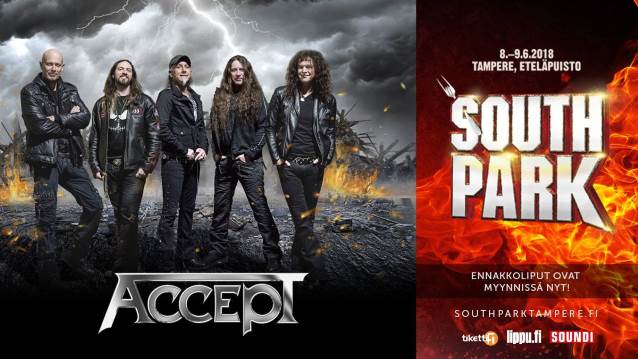