British heavy metal legends IRON MAIDEN played the second show of the “Legacy Of The Beast” world tour earlier tonight (Monday, May 28) at the Hartwall Arena in Helsinki, Finland.

As was the case three days earlier in Tallinn, IRON MAIDEN opened the concert with “Aces High” — complete with a Spitfire war plane replica suspended over the musicians — and continue with “Where Eagles Dare”. Other notable tracks during the set included the Blaze Bayley-era classics “The Clansman” and “Sign Of The Cross”, as well as three additional songs that received their first airing in years at the Tallinn show: “For The Greater Good Of God”, “The Wicker Man” and “Flight Of Icarus”.

This past March, IRON MAIDEN singer Bruce Dickinson said in an interview that there will be “one or two things” in the “Legacy Of The Beast” setlist “that people are gonna be really surprised by” and predicted that “there’ll be social media madness after the first show.”

The concept for the “Legacy Of The Beast” tour was inspired by MAIDEN‘s mobile game and comic book of the same name and the stage set design features a number of different but interlocking “worlds” with a setlist covering a large selection of 1980s material with a handful of surprises from later albums to add diversity.

MAIDEN manager Rod Smallwood explained: “As our fans know, we’ve been following a particular touring cycle ever since Bruce and Adrian [Smith, guitar] rejoined MAIDEN at the start of the millennium, alternating new album tours with ‘History/Hits’ tours. We enjoy working this way for many reasons, not least because it gives the band a chance to play both new material and the older favorites which we know fans like to hear. It keeps things fresh, not just for the fans but for the band too.

“For this ‘History/Hits’ tour, we decided to base the theme around the ‘Legacy Of The Beast’ name, which suits our purposes perfectly by giving us scope to get creative and have some fun, especially with Eddie! We’re working on a number of different stage sets, all in keeping with the MAIDEN tradition and we hope to give our fans a 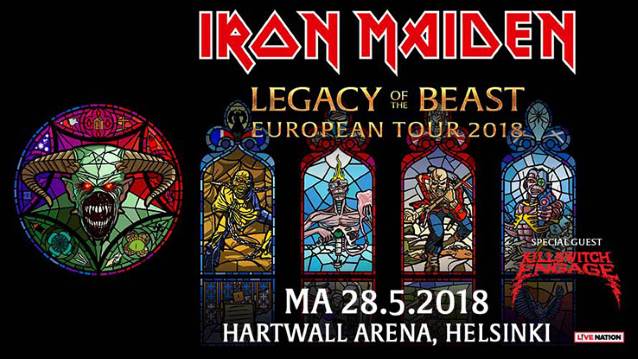