NAPALM DEATH's BARNEY GREENWAY On Next Album: 'It'll Be Finished When It's Finished'

A visualizer video for the album’s triumphant opening track, “Bloodletting”, can be seen below.

While KHEMMIS is undeniably influenced by doom and classic metal, to tag them with those labels doesn’t do justice to what’s accomplished on “Desolation”; a perfect representation of modern heavy metal in 2018 that integrates the past in a way only possible in the present. “Desolation” is not just the best KHEMMIS record to date but a testament to the quality that heavy metal is still capable of.

From the stadium-sized opening notes of “Bloodletting”, it is immediately evident that KHEMMIS is again putting distance between themselves and their earlier influences to inform a sound that is singularly their own. “Isolation” — which the band recently aired live on the Decibel tour — is the album’s lead single and most immediate track, with the classic metal melodies the band have become revered for shining throughout. On epic closer “From Ruin” and throughout the entirety of the album, the lead vocals and melodies of Phil Pendergast are the clearest, most powerful and best arranged that the band has achieved. Working for the third time with Dave Otero at Flatline Audio in Denver, the band and producer now have the familiarity and mutual experience to arrive at the perfect symbiosis of songwriting, arrangement and production value.

KHEMMIS states about the new single: “‘Bloodletting’ displays a number of new directions we take throughout this album. A big, harmonized overture gives way to soaring vocals and classic metal grooves before dragging you into uncharted, crushing darkness.”

“Desolation” is completed with cover artwork by Sam Turner (BLACK BREATH, 3 INCHES OF BLOOD, IN THE COMPANY OF SERPENTS). The album will be released on CD, digital and LP — with a foil-stamped jacket and eight-inch lyric booklet. 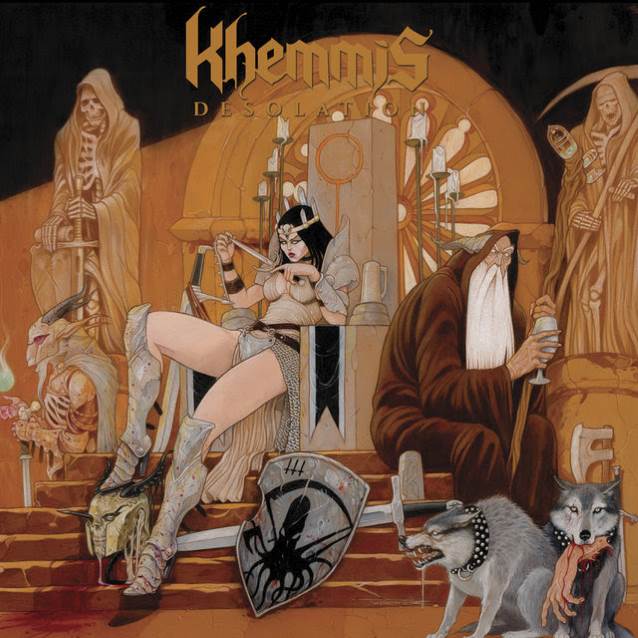