For Those About to Squawk: The Body & Full of Hell, Cavalera Conspiracy, Infernal Blast

KORN will play three very special shows in celebration of the 20th anniversary of the band’s “Follow The Leader” album.

KORN guitarist Brian “Head” Welch said in a recent interview that these will be the band’s only U.S. shows this year before embarking on a “cool tour” in 2019.

Singer Jonathan Davis told Noisey about “Follow The Leader”: “Making that record almost killed me. Our booze and alcohol budget… like, we spent $60,000 on alcohol to make that record. [Laughs] Last record of me getting fucked up, and it was insane. First we started out and wrote ‘Freak On A Leash’ and ‘Got The Life’ and all this other stuff in a rehearsal studio in Gardenia or some shit like that. We did it all ourselves, and we had all these producers come in trying to sell us shit, and we ended up going with Steve Thompson. We picked him because he actually did his homework and came into the studio with a couple cases of Coors Light. And because he did that, he got the job. [Laughs] Eventually, we got in the studio with Steve and he’s a great guy but it just wasn’t working out. So we had the engineer Toby Wright come in and he got us through everything. It was also the first record without Ross [Robinson]. Like, that record would’ve never been made without Ross. He’s into that guttural and emotional real shit. I love it too and I appreciate it, but it was time for us to do different types of songs. And it paid off, man. It worked.”

KORN has been quiet since completing the touring cycle for its 2016 album, “The Serenity Of Suffering”, and Welch was asked by Rock & Review if the band intends to return to the road in 2018. He replied: “We’re doing only [three] shows this year in America: L.A., Vegas, San Francisco — that’s it. We’ve got some plans to resurrect some cool tour plans next year, 2019. But it’s cool to have time off.”

Welch made his remarks at the Nashville Film Festival, where he was promoting “Loud Krazy Love”, a new documentary about him and his daughter.

Jonathan also recently confirmed that the band is working on its 13th studio album.

The singer admitted not long ago that he had a hard time getting back into a heavier style for “The Serenity Of Suffering”. “I just wasn’t feeling it,” he said. “I had to go through a process of falling back in love with the heavier style of music of KORN. I had to go through lots of writer’s block. There’s all kinds of things, all kinds of issues, personal stuff. It was all those things going on at once, but it wasn’t that I thought the music was bad. I was just coming up blank.”

Davis himself has been touring to support the upcoming arrival of his new solo album, “Black Labyrinth”, which will be released on May 25.

The set includes the single “What It Is”, which has climbed into the Top 5 on rock radio. 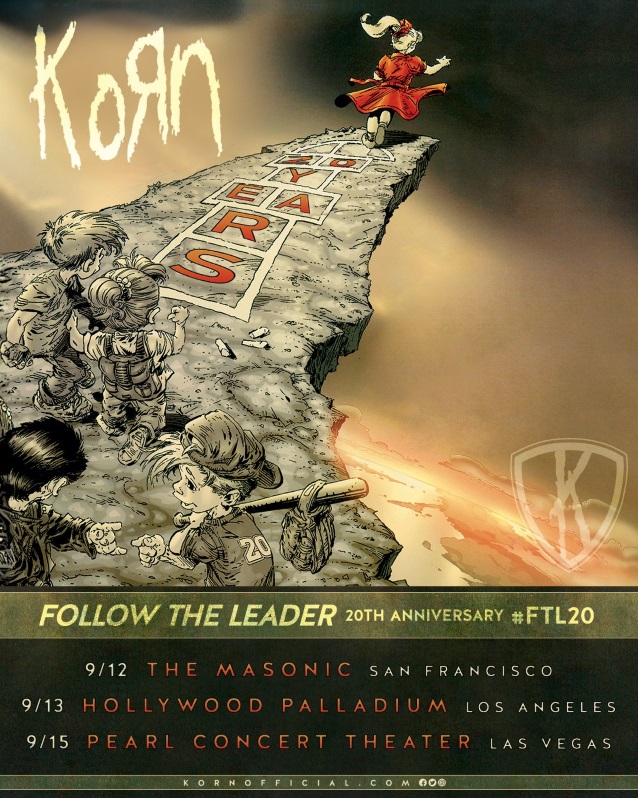