OTEP, the band led by singer, poet, illustrator, author and activist Otep Shamaya, is about to unveil the most uncompromising, candid, all-inclusive and controversial assessment of the current residing political regime that it has ever released in the form of its eighth full-length album, titled “Kult 45”. Drawing influences from politically charged recording artists of the past but allowing her artwork to remain fully and undeniably OTEP, Shamaya continues her nearly two-decade invasion of the senses on July 27 when “Kult 45” drops via Napalm Records. This is OTEP like you’ve never heard them before.

“Kult 45” is available for pre-order now exclusively via the Napalm Records online store, and will be available in CD (jewel case) format with bonus tracks and vinyl format in black, as well as individual red and gold vinyl colors (each Napalm Records exclusives). Digital pre-orders will become available soon.

Throughout the span of her career, Shamaya has been an undeniable force in bringing awareness via various acclaimed mediums to social and political injustices felt by various communities and subcultures. For years, publications such as Revolver magazine have lauded Shamaya for “following in the footsteps of outspoken musicians from folk singer Woody Guthrie to RAGE AGAINST THE MACHINE‘s Zach de la Rocha, dubbing her “one of music’s catalysts for social change”. So, with the political climate as it is today, it’s prime time for OTEP to make their voices heard in their primary medium — song.

“You can expect a complete and total mutiny of the senses on ‘Kult 45’,” says Shamaya. “That said, it’s important for fans to know that this record is not just an indictment of Trump. The idea is rather to empower people to stand up and remind them this is our country and we have the power. It’s primarily a rallying cry for people with common sense and good-natured patriots to rise up and know that we own this nation.

“Although the album is produced well technically, lyrically, it’s very raw,” she continues. “Musically, we explore different genres — we’re trying to reach everyone. I don’t want to be limited to one genre or to be anchored to a particular space where I can only reach certain political minds. It’s important to me that I’m sending a clear and concise message to the Resistance — the people out there bending the barricades and fighting for justice is this country.”

“Kult 45” was recorded at The Lair in Los Angeles, completely utilizing the same equipment used for OTEP‘s first album, “Sevas Tra” (down to Shamaya‘s vocal microphone, a SHURE Beta 58), in order to create a sound reminiscent of their roots. “Kult 45” was self-produced by the band, with assistant engineering from Larry Goetz, Nicolas Schilke and Lizzy Ostro.

Shamaya explains that “Kult 45” is the most authentic album OTEP has ever released, at least since their first record, and self-producing it helped achieve this result. “We had the freedom to be able to write, record and exist within the songs on ‘Kult 45’,” she says. “Things needed to be said and songs needed to be written that reflect the times. We weren’t under anyone else’s agenda, there was no pressure to create a ‘single’ or a song for radio, and the band was really able to shine.”

OTEP does not hold back on “Kult 45”, pointing out all sorts of political duplicities and leaving them in their wake. The band explodes on aggressive, adamant anthems like “Halt Right” and “Molotov”, which act as timely outcries against the recent resurgence of hate groups. Tracks like the in-your-face “Cross Contamination” explore the hypocrisy of the evangelical right giving Trump a pass on his infidelities, and cherry-picking scriptures to fit their ideologies. “Invisible People” approaches immigration issues while pointing a strong finger at Trump, the electronically charged “Boss” aims to break, fight, and redefine gender roles, and “Trigger Warning” targets rape culture — specifically Stanford rapist Brock Turner — with a vengeance.

“Shelter In Place” investigates the topic of school shootings, specifically. “This song is extremely important to me because it was inspired by the bravery of those Parkland students who formed the March For Our Lives,” says Shamaya. “The outro is, ‘hey hey NRA, how many kids did you kill today?’ because they’ve actively taken measures to make our kids less safe in school. They want to arm teachers, they want to put more guns in schools and on the street. The song itself isn’t specifically anti-gun, but aimed at the hypocrisy of the NRA and certain belief systems that lose sight of what’s truly important — the lives of our children.”

The album pre-closes with a cover of “Wake Up” — an homage to political music icons, major “Kult 45” writing inspiration, and original track recording artists RAGE AGAINST THE MACHINE — as well as a unique finisher, “The Tribe Speaks”, featuring recorded voicemails from fans expressing how OTEP‘s music has changed their lives. “In the voicemails people say they feel empowered, that the music saved them,” explains Shamaya. “They told us that they discovered their identities with our music. There was a girl who said that she considered committing suicide and that our music pulled her out of that. These were all based on last album, and I think that this album will have a similar impact on people. These are so moving — it’s what keeps me fighting. Really.”

“We want to empower people,” ends Shamaya. “This album wasn’t written to only wake people up, it’s meant to carbonate people with the hope and confidence that they can make a difference.”

OTEP will go out on a headline tour supporting “Kult 45”, beginning July 5 in Las Vegas, Nevada at the Hard Rock Hotel And Casino. The tour will run for nearly a month and a half, coming to an end in Ventura, California on August 18. 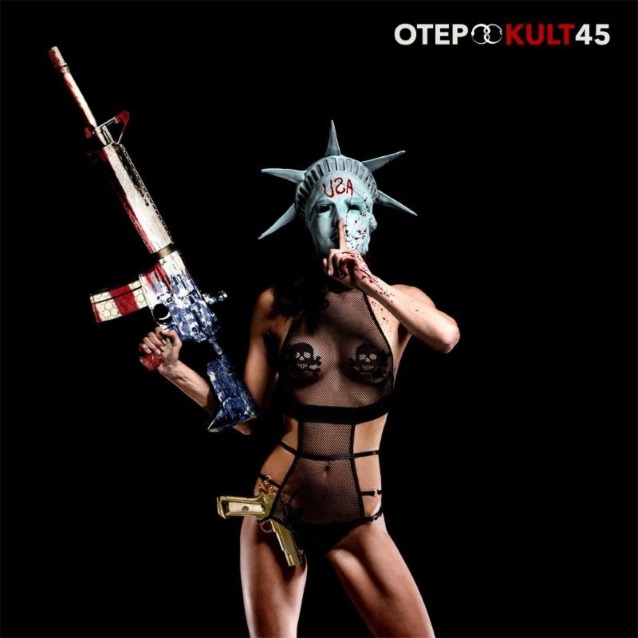