PROPHETS OF RAGE, FIVE FINGER DEATH PUNCH, GODSMACK and STONE TEMPLE PILOTS are among the scheduled performers at the 2018 edition of the Montebello Rockfest, set to take place June 14-16 in Montebello, Quebec, Canada.

Rockfest will celebrate its 13th anniversary with a back-to-roots edition featuring over 70 rock, metal, punk-rock, hardcore, and hip-hop acts.

Among the headliners is PROPHETS OF RAGE, which is essentially a RAGE AGAINST THE MACHINE reunion with its three musicians — Tom Morello, Brad Wilk and Tim Commerford — backed by singers B-Real (from CYPRESS HILL) and Chuck D (from PUBLIC ENEMY), plus PUBLIC ENEMY‘s DJ Lord. The band will perform all of RAGE AGAINST THE MACHINE‘s hits, plus a segment of hits by CYPRESS HILL and PUBLIC ENEMY, and even a segment of songs by their old group AUDIOSLAVE as a tribute to Chris Cornell.

Also scheduled to appear are Californians WEEZER, who will play their first show in Quebec in four years, and the bands FIVE FINGER DEATH PUNCH and GODSMACK, two leading acts in modern hard rock/metal. By popular request, U.S. actor Jack Black‘s group TENACIOUS D will be back for its second appearance in Quebec following a performance before a record-setting crowd at Rockfest 2015.

Other acts on the bill include: emblematic alt rockers STONE TEMPLE PILOTS, the posthardcore/pop-punk group A DAY TO REMEMBER, metalheads LAMB OF GOD, veteran emo band JIMMY EAT WORLD, the legendary DJ Yella from the hip-hop outfit NWA, and pop-punk Canadians SUM 41. These acts will be joined by a punk-rock delegation consisting of RANCID, DROPKICK MURPHYS, FLOGGING MOLLY, LAGWAGON and MILLENCOLIN, plus the pop-punk band ALL TIME LOW and the post-hardcore ensemble THE USED.

Weekend passes are available this year at a much-discounted price: $99 fees included for the presale, and $149 fees included for the regular sale. Once again, visitors can pay their order in five instalments. With the excitement generated up to now, several pre-sales sold out and such a strong lineup, the team is confident that the event will sell out again this year. VIP packages are also available.

Rockfest was started by Alex Martel, a then-17-year-old kid from Montebello who wanted to turn his hometown into a rock ‘n’ roll paradise. Rockfest quickly became one of Canada’s major music festivals and the largest event in Western Quebec thanks to its impressive programming, electrifying ambience, unique camping experience, and affordable rates. The festival takes place in the middle of the countryside, near the Ottawa River, between Montreal and Ottawa. Every year, Rockfest welcomes thousands of rockers from all over the world.

For complete details, go to www.montebellorockfest.com. 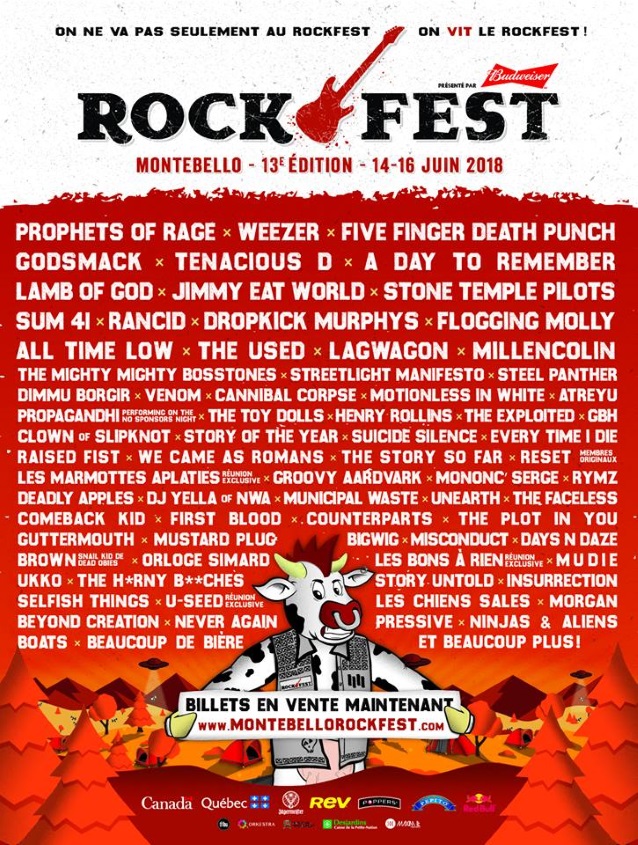