SEBASTIAN BACH: 'Since DONALD TRUMP Became President, Facebook Became Not Fun For Me'

TREMONTI, the band comprised of Mark Tremonti on vocals/guitars, Eric Friedman on guitars and Garrett Whitlock on drums, has announced a new set of European tour dates. Already confirmed to support IRON MAIDEN for a number of shows in mainland Europe, TREMONTI‘s new dates are all headline appearances.

Pre-sale tickets are available now with general sale beginning this Friday, March 2 at 10 a.m. from MarkTremonti.com, all good ticket agents, and direct from venue box offices. Special guests will be announced at a later date.

TREMONTI‘s fourth full-length album, “A Dying Machine”, will be released this summer via Napalm Records. The disc is being produced by Michael “Elvis” Baskette, who has helmed all previous TREMONTI albums along with ALTER BRIDGE‘s last four long-players.

A listening party and performance event for “A Dying Machine” will take place on May 12 at the Social in Orlando, Florida.

Although Wolfgang Van Halen was part of TREMONTI‘s touring band in 2013 and played on “Dust” and “Cauterize”, he sat out TREMONTI‘s tour schedule because of commitments with VAN HALEN.

TREMONTI recruited Tanner Keegan to play bass on its most recent tour. 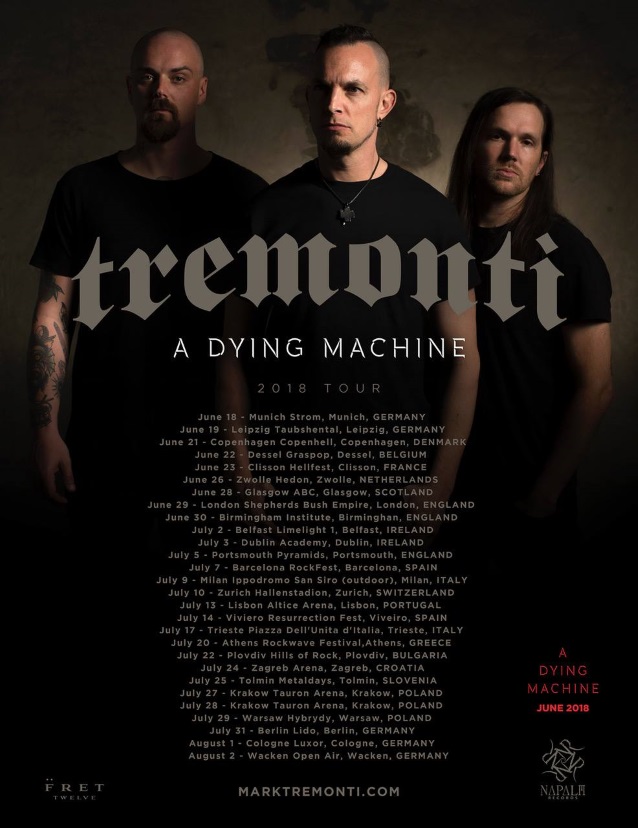