DOUG ALDRICH: 'I Worked My Ass Off To Keep WHITESNAKE Alive'

WE SELL THE DEAD, the new band featuring Niclas Engelin (IN FLAMES, ENGEL) on guitar, DRÖMRIKET‘s Jonas Slättung on bass, Gas Lipstick (formerly of HIM) on drums and Apollo Papathanasio (SPIRITUAL BEGGARS, FIREWIND) on vocals, will release its debut album, “Heaven Doesn’t Want You And Hell Is Full”, on February 23 via earMUSIC.

Engelin told Dead Rhetoric about WE SELL THE DEAD‘s musical and lyrical approach: “This is a band of friends and musicians who want to do something different and dare to do so. It was the main priority to do something different coming from us and to turn some heads with our songs. We basically do what we love and we feel so fortunate to not have any boundaries or secret map. We just follow our hearts and try to do the best songs we can do and have tons of fun doing it.”

He added: “I really wanted to something different and paint with bigger colors and take my time before the chorus kicks in. I just love the Tony Martin era of BLACK SABBATH and MAGNUM‘s ‘On A Storyteller’s Night’. I always wanted to try to outdo myself by writing that kind of music with my own way of writing, of course.”

Regarding WE SELL THE DEAD‘s future plans, Engelin said: “We would like to take the band in a live environment and try to do something similar to the album’s theme, but we have to find out how to do it first. We are making our first appearance at our release February 23 in Gothenburg and we will just go from there. We have some ideas how to do this. We have already mapped some ideas for the next album and I have been writing some epic and big stuff lately which the guys are putting their magic to as we speak, so we are in the flow.”

“Heaven Doesn’t Want You And Hell Is Full” track listing: 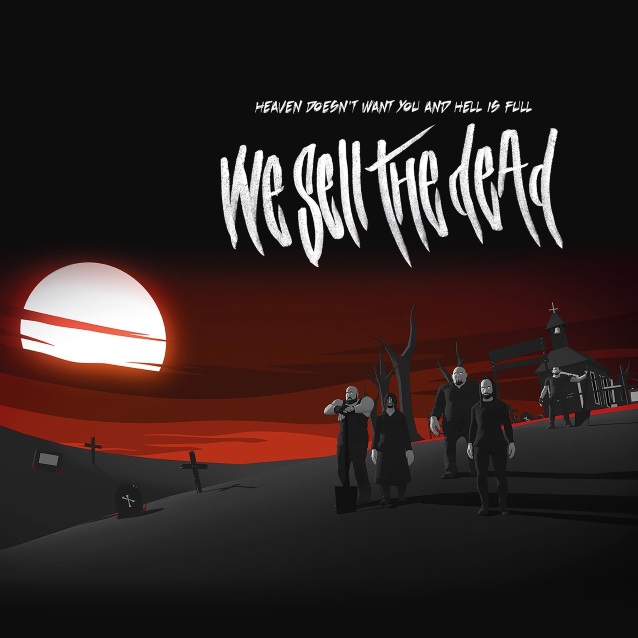