For Those About to Squawk: Slapshot, Wombbath, Alien Weaponry

Canadian metal legends ANVIL will embark on a U.S. tour in late spring. The trek starts May 2 in Buffalo, New York and runs through June 16 in Canton, Ohio.

ANVIL‘s latest album, “Pounding The Pavement”, was released on January 19 via SPV/Steamhammer as a digipak version (including one bonus track and poster), two-LP gatefold colored version, digital download and stream. The disc was produced at the Soundlodge studios in Rhauderfehn in the northwest of Germany, where ANVIL found not only the necessary peace and seclusion to concentrate on their recordings, but also met in studio owner Jörg Uken the ideal producer for their ambitioned work.

Why has “Pounding The Pavement” turned into such an awesome offering? Guitarist/vocalist Steve “Lips” Kudlow explains: “The songwriting process started immediately after the work on our previous album, ‘Anvil Is Anvil’, had been completed. So our thoughts instantly turned to the future again. After ‘Anvil Is Anvil’ had been cut, everybody knew what we had just delivered and what ANVIL‘s future should sound like.”

Despite the diverse range of their ideas, Kudlow, drummer Robb Reiner and their bassist Chris Robertson have succeeded in filling the typical trademarks of this unusual band with life once again — which is an important aspect for every ANVIL release. After all, tradition and reliability play an essential role in this group. Kudlow says: “Of course we always allow inspirations from earlier recordings to seep in, but always with an emphasis on evolving the characteristic ANVIL sound.

“Lots of fans keep asking us to play the way we did in the so-called good old days. That’s why I try from time to time to pick up on that exciting feel of our older material. Mind you, it’s always exclusively about the basic atmosphere of that time, never about copying an older song.”

The programmatic album title “Pounding The Pavement” is a synonym for the consistently serious challenge of ensuring ANVIL‘s financial survival. Kudlow says: “I feel nothing could describe the way we’ve been working for the past forty years better than ‘Pounding The Pavement’. ANVIL have tried for four decades to earn enough money to survive and continue to make music.” 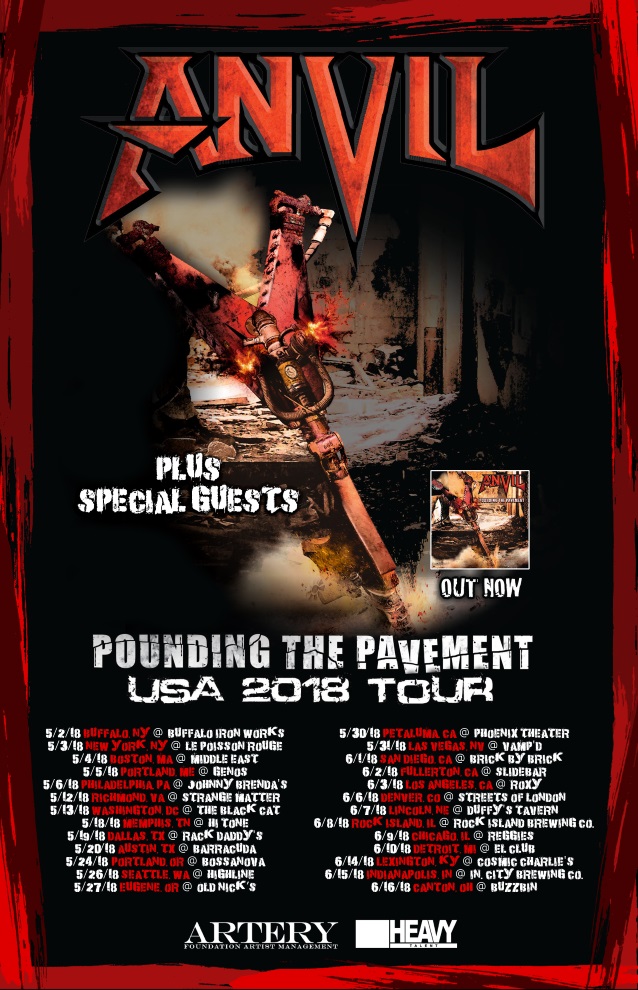