In the five-minute clip below, which was filmed during the question-and-answer portion of the event, Ellefson recounts how MEGADETH was formed 35 years ago.

Ellefson was in MEGADETH from the band’s inception in 1983 to 2002, when the group briefly broke up because guitarist/vocalist Dave Mustaine suffered severe nerve damage that left him unable to play. After Mustaine reformed MEGADETH with an all-new lineup in 2004, Ellefson sued his former bandmate for $18.5 million, alleging that Mustaine still owed him substantial merchandise and publishing royalties. In January 2005, the case was dismissed in court, and five years later, Ellefson rejoined MEGADETH.

In a January 2016 interview with the Cape Girardeau, Missouri radio station Real Rock 99.3, Mustaine implied that Ellefson was not a founding member of the band because, he said, “MEGADETH was already in its formative phase long before I even knew David Ellefson.” The bassist later said that he was “technically” a founding member of MEGADETH because he was “in the room” the day MEGADETH decided to change its name from the previous working moniker of FALLEN ANGEL at the suggestion of the band’s then-guitarist Greg Handevidt.

In addition to Mustaine and Ellefson, MEGADETH‘s current lineup includes former SOILWORK drummer Dirk Verbeuren and Brazilian guitarist Kiko Loureiro, who was previously best known for his work with ANGRA.

Initially conceived as a covers band, METAL ALLEGIANCE, which features a rotating cast of high-profile musicians, played a string of well-received shows before inking a deal with Nuclear Blast and heading into the studio to record an album. 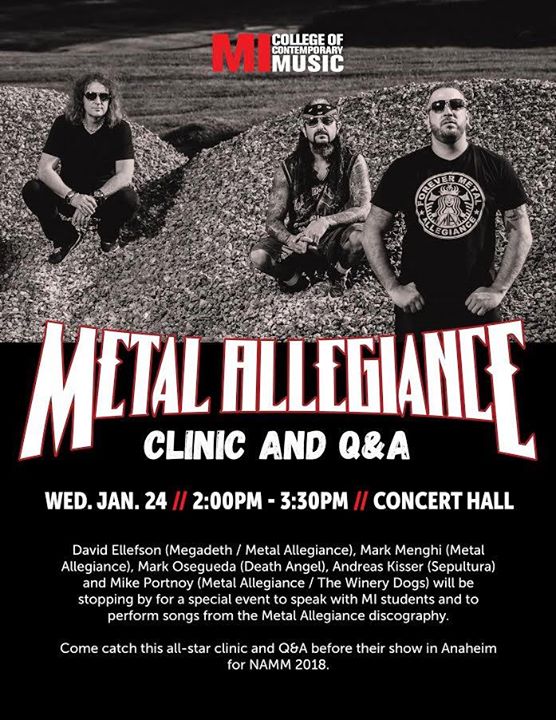