POISON's BOBBY DALL On Former Bandmate RICHIE KOTZEN: 'I Don't Hold A Grudge Against Him'

IRON MAIDEN's BRUCE DICKINSON: 'I'm Not A Great Believer That A Voice Is Just About Singing'

METALLICA has once again teamed up with Vans to bring you two new styles in the Vans x Metallica exclusive collection of footwear, apparel, and accessories. The latest installment from the long-time partnership marks the third collaboration between the band and the iconic Southern California company.

Available for purchase in the METALLICA store and on the shelves at your favorite retailer this Friday, February 16 are two new styles of shoes. Up first is the Sk8-Hi Reissue in full grain leather upper and tonal deco-stitched Sidestripe with an etched METALLICA logo on the sidewall with a wrapped version on the quarter panels. The Classic Slip-On features an all-over logo print across the vamp and is finished with the same engraved logo on the sidewalls. A short sleeve t-shirt and trucker hat will also be available.

As previously reported, METALLICA will receive the Polar Music Prize, a musical equivalent to the Nobel Prize, this spring. The award, which recognizes international excellence in music, will bestow the metal legends with a cash prize of one million Swedish kronor, roughly equivalent to $126,000. The band will donate the money to its own All Within My Hands organization, which aids communities in need with workforce education, food-bank donations and other local services.

The “WorldWired” trek was Pollstar‘s fifth-highest grossing tour of 2017, with 1.5 million tickets sold and $153 million earned. The band was also the top-selling rock act of the year and had the third best-selling rock album. 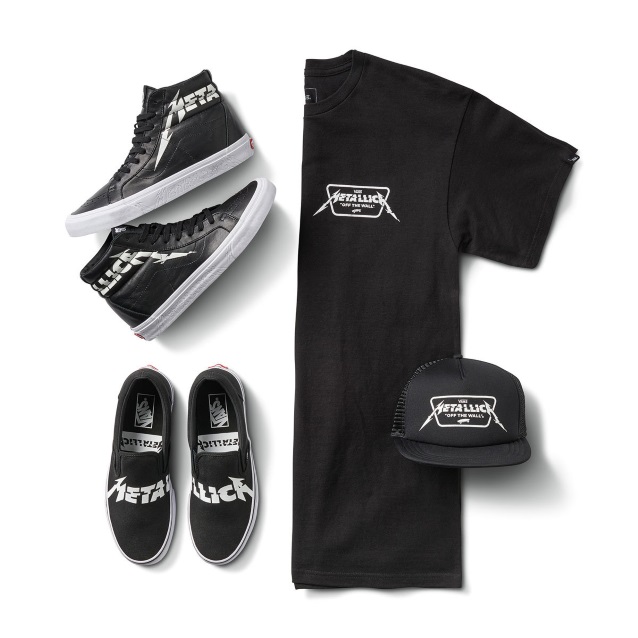