LIFE OF AGONY‘s video for the song “Dead Speak Kindly” can be seen below. The clip was directed by Leigh Brooks of Firebelly Films.

“Dead Speak Kindly” is taken from LIFE OF AGONY‘s latest album, “A Place Where There’s No More Pain”, which was issued in April 2017 via Napalm. LIFE OF AGONY‘s fifth studio LP marked the band’s first release since singer Mina Caputo (formerly known as Keith Caputo) came out as transgender in 2011.

LIFE OF AGONY last month announced the addition of drummer Veronica Bellino to the group’s ranks. She joined the band as the replacement for Sal Abruscato, who “amicably” left LIFE OF AGONY in December.

Bellino is a New York native who has been on the rise as one of the industry’s hottest young drummer/songwriters. Veronica has co-written with the legendary DMC, found a national spotlight in The Game’s “Red Nation” video, worked with LL Cool J as a member of his signed band 13, conquered dozens of stages with drum icon Carmine Appice‘s SLAMM group, and worked with Living Legend Award recipient Jeff Beck.

Bellino will make her live debut with LIFE OF AGONY when the band plays two intimate hometown shows on Wednesday, April 18 and Thursday, April 19 at Saint Vitus in Brooklyn, New York. Each night’s set will be unique, with the group diving deep into its catalog to perform never-before-played tracks along with some of its classics.

“I am extremely excited and grateful to play these first two shows in the birthplace of LIFE OF AGONY,” said Bellino. “Being a New York native myself, I can’t wait to share this with friends, family and fans!”

Caputo added: “I’m excited to think that this thing we’re doing is touching so many people in so many cultures. I’m extremely grateful to be sharing that stage again, the most intense stimulating way to hear music, with my brothers Alan and Joey, and, of course, our newest member of the band, Veronica. Connecting with her is certainly another dream come true for us. I’m so excited to do our thing, with all our soul and all our might.” 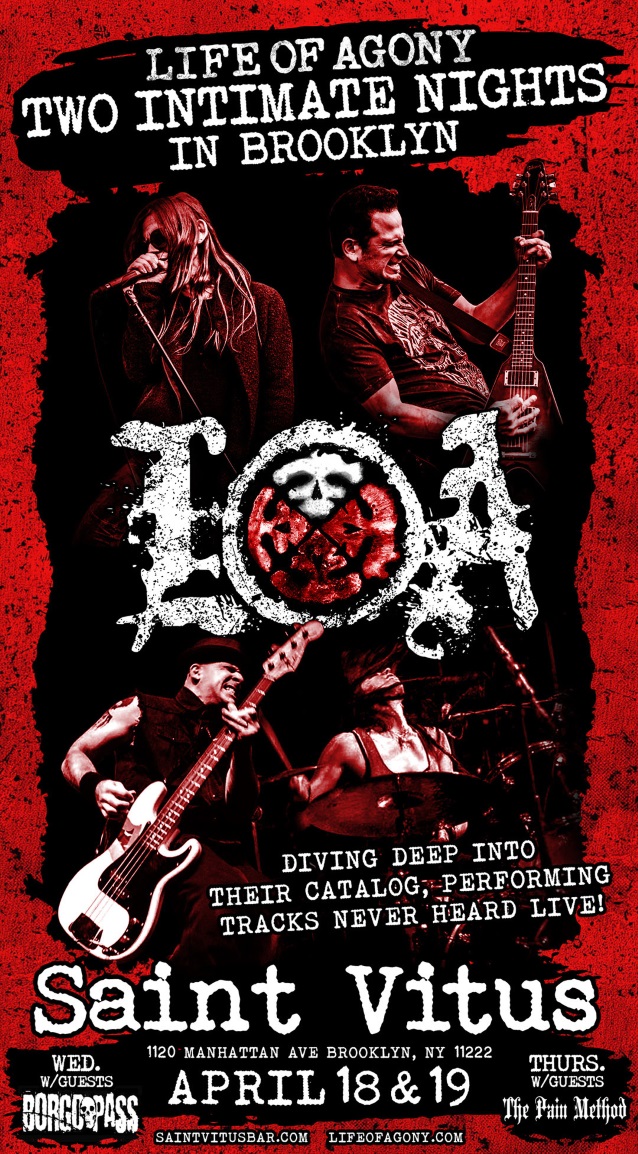