BRUCE DICKINSON: 'People Are Prepared To Pay More Money For A Book Than They Are For An Album'

ZAKK WYLDE: 'I Love Getting On Stage Every Night'

Speaking to Jimmy Kay of Canada’s The Metal Voice at this past weekend’s NAMM show in Anaheim, California, MEGADETH bassist David Ellefson said about the band’s milestone anniversary: “With the 15 studio albums all throughout this year, we’re gonna honor an album per month, sometimes two a month. This month is ‘Dystopia’ and ‘So Far, So Good… So What!’, which both came out in January 2016 and 1988, respectively. So that is the initiative this year. We have a full summer of festival tour dates.”

Asked what he means when he says that MEGADETH will “honor an album per month,” Ellefson said: “We’re honoring them in the ’35 Years Of Megadeth’ campaign. Probably in the live shows, we’re gonna start to incorporate more of those songs from the catalogue. There’s some merchandising packages for fans. We’re just making a whole extravaganza to basically thank our fans for giving us 35 years of the band.”

When the “35 Years Of Megadeth” campaign was first announced last week, founder Dave Mustaine said: “When I started MEGADETH, I didn’t imagine myself living for 35 years, let alone my band reaching this incredible milestone. Thanks to almost everyone I’ve met, worked, and played with these last three and a half decades.”

Throughout the year, Mustaine will also celebrate the band’s anniversary on his weekly Gimme Radio show, “The Dave Mustaine Show”, which premieres each Thursday at 12 p.m. PST / 3 p.m. EST, with exclusive giveaways, contests, and behind-the-scenes stories about his career and MEGADETH. Fans can tune in and communicate directly with Dave in the Gimme Live chat feed at GimmeRadio.com or via the Gimme Radio app.

MEGADETH is tentatively planning to enter the studio in mid-2018 to begin recording its new album for a 2019 release. Mustaine revealed on Twitter that he is in the process of “collecting ideas” for the follow-up to “Dystopia”.

MEGADETH‘s upcoming effort will mark the group’s first release to feature drummer Dirk Verbeuren, who officially joined the group a year and a half ago. 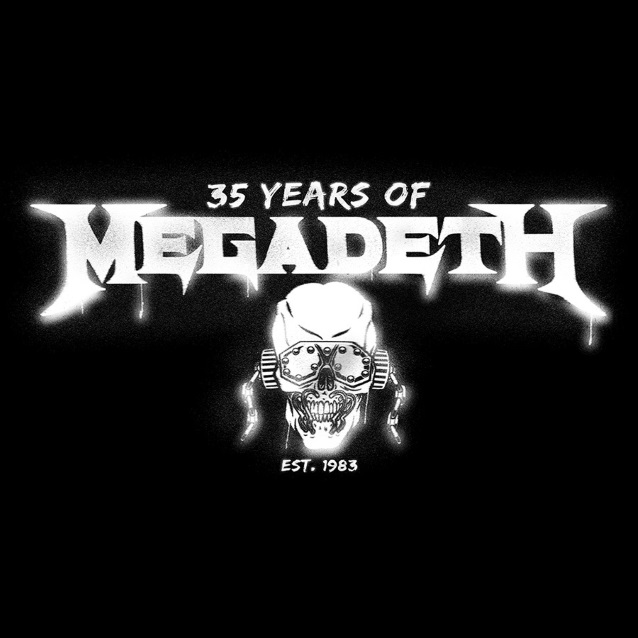