BIFF BYFORD On SAXON's Struggles During Mid-1980s: 'I Think Everybody Lost Their Way A Bit Around That Time, Actually'

On January 5, “Met Al Metal” — Israel’s metal radio show hosted by brothers Lior and Niv Peleg — conducted an interview with vocalist Dani “Filth” Davey of British extreme metallers CRADLE OF FILTH. You can now listen to the chat using the Podbean widget below.

Asked which band he prefers, MEGADETH or METALLICA, Dani said: “I liked early MEGADETH. I lost track of MEGADETH during the noughties. METALLICA, yeah, [I’m] a big fan, but, again, [I] lost track [of them]. I think one of the few albums I ever took back [to the record store after buying them] was [METALLICA‘s] ‘St. Anger’. I think there’s only been two albums that have actually gone back to the store. One of them was VENOM‘s ‘Metal Black’, which just dreadful, and the second one was ‘St. Anger’. It was just dreadful. As soon as I heard it, I was, like, ‘This just gives me a headache.’ I don’t know what they were thinking.

“I like the new [METALLICA] album [2016’s ‘Hardwired… To Self-Destruct’],” he said. But, he added, “They’re not very analytical and everything seems to drag on too long. They spend three minutes trying to get back to a point where the song forms again. They’re not very good at self-editing; that’s why they have these massively long songs. I think that’s down to [drummer] Lars [Ulrich], ’cause he puts the songs together. And he’s a good drummer, but he’s not the best drummer in the world, to be fair.

“[METALLICA‘s 2008 album] ‘Death Magnetic’ was really, really desperately trying to be ‘…And Justice For All’. Even the way the songs are set out — like song four has gotta be a little bit like ‘One’, and we have the fast [track] at the end.”

Asked if there are bands that he hates, that he can’t listen to and that he can’t understand why other people listen to, Dani said: “There’s bands I’m not particularly keen on, but I understand, being a musician and having been through all this, I totally understand where people are coming from. I respect people’s opinions.

“I’ve never been a massive fan of stuff like MACHINE HEAD, for some reason; I just never really got into MACHINE HEAD,” he admitted. “Mainly because I came from thrash metal and death metal and stuff, and I always thought MACHINE HEAD were… I didn’t get when they did ‘The Burning Red’. I can’t understand how any band could come back from such an abysmal, abysmal album, where they were trying to be like LIMP BIZKIT. And then they come back and be really cool and heavy again and swear a lot and everybody loves them. And nobody mentions the fact that he [Robb Flynn] wanted to be Fred Durst. But that’s just me. I don’t hate the band; I’m just not very keen on them… Again, I don’t hate it — I just don’t understand it. And that’s the difference.”

CRADLE OF FILTH will make its long-awaited triumphant return to North America with a headlining tour this March/April. Support on the trek will come from the Ukrainian metal band JINJER.

CRADLE OF FILTH‘s 12th album, “Cryptoriana – The Seductiveness Of Decay”, was released last September via Nuclear Blast. The disc was recorded at Grindstone Studios, Suffolk, U.K. by the very honorable Scott Atkins, who has been the resident go-to producer for CRADLE OF FILTH for several albums. 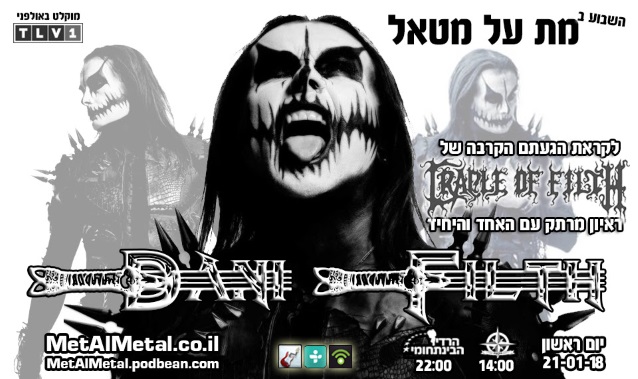