Original KISS guitarist Ace Frehley has been added to the list of performers who will appear on The KISS Kruise VIII. The cruise is set to sail on Halloween (October 31) on Norwegian Jade leaving out of Miami, Florida. Also scheduled to play on the ship this year are KISS, former KISS and current GRAND FUNK RAILROAD guitarist Bruce Kulick and his brother Bob, who previously performed on last year’s Kiss Kruise.

Frehley and KISS bassist/vocalist Gene Simmons performed together onstage for the first time in over 16 years last September at The Children Matter benefit concert to support the victims of Hurricane Harvey. They also collaborated on two songs for the former KISS guitarist’s next solo album.

Rumors about Frehley‘s return to KISS gained strength in 2016 after he teamed up with KISS lead singer Paul Stanley on a cover of FREE‘s “Fire And Water”, marking their first collaboration since 1998’s “Psycho Circus”.

Frehley‘s version of “Fire And Water” appears on his covers collection “Origins, Vol 1”, which received great reviews and landed in the Top 25 on the Billboard album chart.

Stanley told Billboard last year that he had no interest in a reunion of KISS‘s original lineup.

The four original members of KISS were inducted into the Rock And Roll Hall Of Fame in April 2014 by RAGE AGAINST THE MACHINE guitarist Tom Morello.

KISS did not perform — the Hall Of Fame wanted the original quartet only to play, while Stanley and Simmons insisted on the current lineup performing as well. In the end, nobody won that battle.

A destination of her own, Norwegian Jade offers guests Norwegian Cruise Line’s signature freedom and flexibility to enjoy 11 onboard bars and lounges, 15 dining experiences, one outdoor pool, hot tubs, and a full menu of spa treatments. Enjoy duty-free shopping and awe-inspiring architecture in beautiful Nassau. Explore your adventurous side diving into the crystal blue water with dolphins and colorful fish, or try your luck in a casino.

To learn more about The KISS Kruise VIII, visit TheKISSKruise.com. 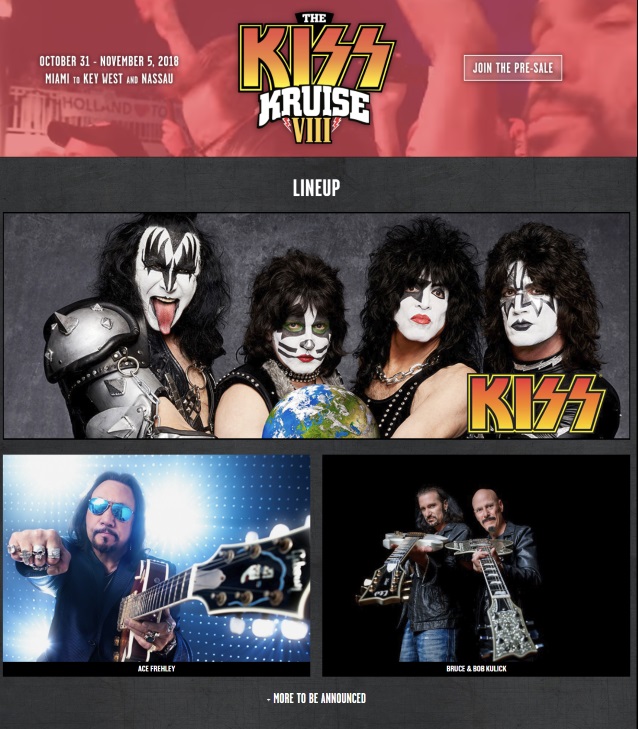