This Friday, January 12 marks the release of the new album from WHITE WIZZARD. Today the lyric video to the disc’s title track, “Infernal Overdrive”, has been released and can be viewed below.

Fans have long anticipated the return full-length from traditional metal heroes WHITE WIZZARD, who revamped their lineup last year to include the return of their strongest players to date, vocalist Wyatt “Screaming Demon” Anderson and guitarist James J. LaRue. Reviews have been overly positive and critics are recognizing the band firing on all cylinders by not only bringing back all of their expected true metal ingredients but flavoring this hour-plus ride with an expanded repertoire of moods and influences citing comparisons to RUSH, LED ZEPPELIN and METALLICA on certain tracks, all highlighted by the group’s seasoned musicianship and proper album production, courtesy of Ralph Patlan (MEGADETH, UFO).

“We’re very excited to release yet another song from our new album via this lyric video created by LaRue. The lyrics are a bit of a sarcastic comment on modern times… as we watch technology and idiocy fuse together for one entertaining ride as humanity circles the drain into the abyss,” explains Jon Leon. “We bring it a bit heavier here and Wyatt sings his ass off on this one.

“We are really proud of the new album and super excited to finally share it with the fans. We’re doing a special run of shows starting Wednesday and are super excited to announce that DEVIL’S CUT axe grinder Will Willner will be joining us on second guitar live. He complements LaRue perfectly and it’s a very strong tandem!”

WHITE WIZZARD just shot a proper promo video for a more epic track, “Chasing Dragons”, so keep an eye out for that.

“Infernal Overdrive”, the band’s fourth full-length, will be released on all digital platforms, as well as CD and gatefold double colored vinyl (orange haze retail version or white exclusive from the band and label).

WHITE WIZZARD will play a handful of special shows in the Southwest to kick off “Infernal Overdrive”‘s release, as well as a showcase in London on March 31. 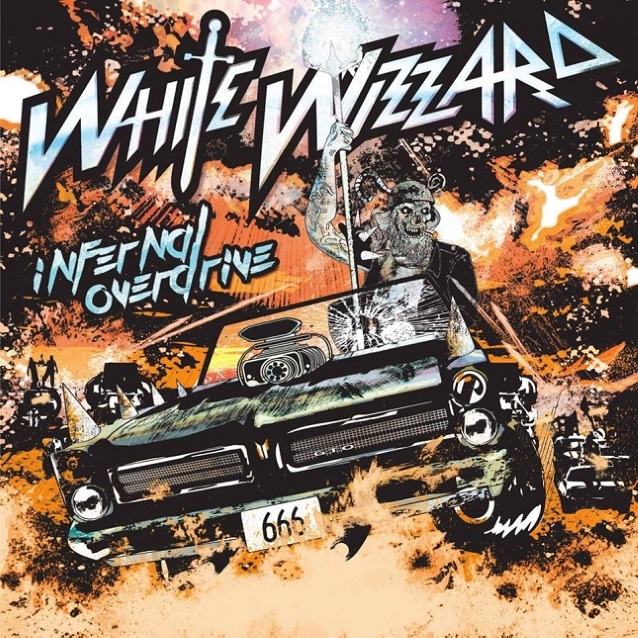