Mark Slaughter (SLAUGHTER, VINNIE VINCENT INVASION) was recently interviewed by Tigman of the Albany, New York radio station Q103. The full chat can be streamed below. A few excerpts follow (as transcribed by BLABBERMOUTH.NET):

On his new solo album, “Halfway There”:

Mark: “I engineered it and recorded everything, played the guitar, wrote it, produced it. At the end of the day, you’re wearing a lot more hats, so you have to kind of answer [to] yourself a little bit as opposed to having somebody who’s objectively saying, ‘Hey, why don’t we try this? Why don’t we try that?’ You just end up having to do that yourself. I think that’s the biggest challenge of it all.”

On whether he has an issue with being described as “hair metal”:

Mark: “If I didn’t have my hair, I’d probably have an issue with it, but I have all my hair, so I’m good there. I really think that’s just a title — everybody has to call something a certain thing. Let’s put it this way — I’d rather be a has-been than a never-been. I’m happy with where I came from, and I still think we’re really blessed that we’re able to do this. We’re still out there playing; I’m still out there making music; and my guys are still working double-time. Life is pretty good — it’s just how you look at it.”

On whether SLAUGHTER will ever make another record:

Mark: “If I can get these guys in the studio and away from playing with Vince all the time, we’d be able to do that. [Laughs] Nobody’s getting rich by making records. It’s not about that. It’s about your art — you stick your art forward and you continue to make art whether it sells a zillion or it sells nothing. I think that’s really where I’m at. I’m not looking at the value of it, because in time, it becomes more valuable as time goes by.”

Slaughter recently released a music video for the title track of “Halfway There”. The follow-up to 2015’s independently released “Reflections In A Rear View Mirror” was released in May by EMP Label Group, the U.S.-based label of MEGADETH bassist David Ellefson.

Produced and co-mixed by Slaughter with John Cranfield (AFI, Andy Grammer), with art by famed horror/album artist “Mister” Sam Shearon (ROB ZOMBIE, IRON MAIDEN, KISS, Clive Barker), “Halfway There” is described in a press release as “a blistering showcase of Slaughter‘s seemingly never-ending vocal abilities” and “a glowing testament to his perpetually underserved prowess as a songwriter and multi-instrumentalist, handling all production, engineering, songwriting, arrangements, guitar, and the bulk of the album’s instrumentation himself.” 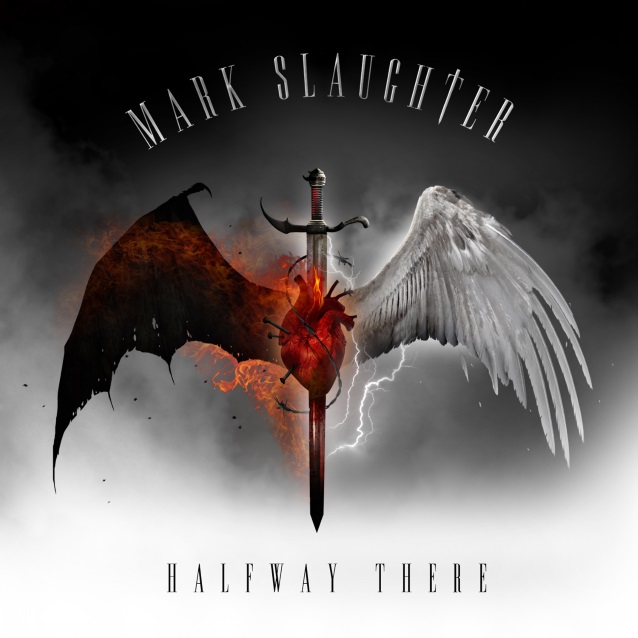