JOHN 5 To Be Joined By NIKKI SIXX, SEBASTIAN BACH, SCOTT IAN For 'Shout At The Devil' Performance At Whisky A Go Go

Guitarist Joe Satriani was recently interviewed by Daniel Jaramillo of Metal Wani. The full conversation can be streamed below. A few excerpts follow (as transcribed by BLABBERMOUTH.NET):

On his forthcoming album, “What Happens Next”:

Joe: “The title started off as a funny little question that kept popping into my head. I was always asking myself while I was on the last tour what I was going to do next. It helped me recognize that I wanted to move away from what I’d been working on on the solo records, for the last few records, and I wanted to either do something completely different or I wanted to circle back to my earliest inclination, or my earliest version of myself as a musician. That meant recognizing that I was really a kid who got started listening to rock music and soul music, and those were the two basic elements of my background. Those were my roots. As things progressed, that question became the title, and by the time I was finished, I realized I should just remove the question mark because I had answered it. It became a funny little set of words — those three words make you think is it a question, or is it a statement? I thought that was very fitting.

“The feel of the record is quite unique. I don’t think I’ve had a record that has had such a fantastic rock/soul groove on it before. I was careful to write songs that allowed the rhythm section to express themselves both rhythmically and harmonically. I can’t discount the fact that [co-producer/engineer] Mike Fraser came up with a very unique sound for this trio. It’s dominated by guitar, bass and drums, and a little bit of my keyboards here and there, but the focus is on the energy and creativity of a three-piece.”

On working with Glenn Hughes and Chad Smith:

Joe: “It was great. I knew that Chad and I could go crazy. We’ve done two CHICKENFOOT records together, a live DVD and a couple of tours, and it’s always explosive when we’re together. It’s always a lot of fun, and we love to revel in our shared roots of early rock music. That was a no-brainer. I was a real big fan of Glenn Hughes, and I was one of those guys that just always thought he was an amazing bass player, but always got credit for his incredible singing voice. I kept thinking, ‘If I could get Glenn and Chad back together again and have them focus on this instrumental approach, it just might be something that is quite unique and exactly what I was looking for.’ I was lucky enough that they were both available and they both wanted to do it. I think Glenn was really surprised because he’d never done an instrumental record before, so it was a first-time experience for him not singing on somebody’s record.”

On the enduring appeal of instrumental music:

Joe: “I think that instrumental music always has its place, because number one, there’s nobody telling you what the song is about. That leaves your imagination free to associate your story with what it is. If it’s an instrumental song, you can forget about the title, and you can make it about whatever you want. This is the freedom that instrumental music has always held for people — it gives them the ability to write their story into it. It has a very unique power all its own because of what’s missing, which is the lyrics.”

On the inspiration behind the G3 tour:

Joe: “I always had a feeling that once we got that first one off, that the audience would feel exactly the way I did, which was so excited to see three different players drop all pretense and agree to play right next to each other and learn from each other and show the audience that they’re human [laughs], and to celebrate the electric guitar with the audience. That’s something that I always wanted when I went to a concert. I was always hoping I would see guitar players together, and step out of their usual show routine, and in that way, they sort of commune with the people in the audience a lot more. It’s less of a presentation of a show; it’s more of a celebration of something we all share.”

“What Happens Next” will be released on January 12, 2018 via Sony/Legacy Recordings. The album sees Satriani once again team with producer/engineer/mixer Mike Fraser, his frequent collaborator over the last 20 years. Fraser is well known for recording/mixing every AC/DC album since 1990’s “The Razors Edge” along with his classic works with Satriani going back to the release of “Crystal Planet” in 1998. 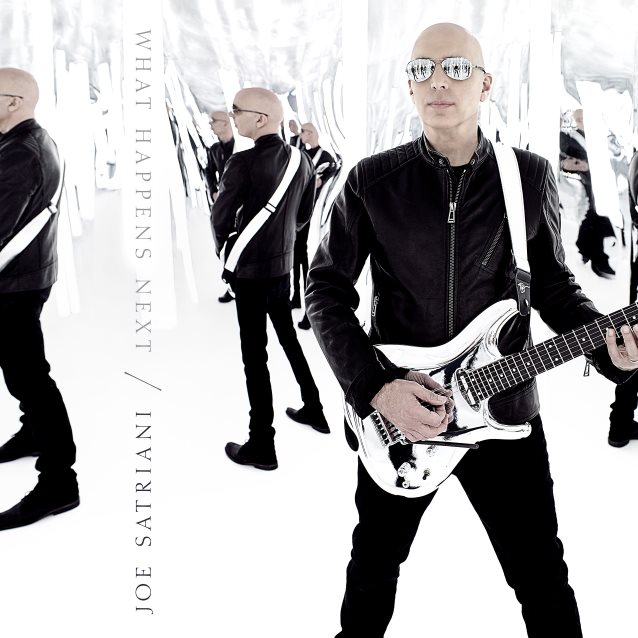