DEF LEPPARD's PHIL COLLEN Says Group Will Continue To Write And Release New Music: 'That's The Whole Point Of Being In A Band'

On November 30, Sam Sheppard from SINATE conducted an interview with Max Cavalera (CAVALERA CONSPIRACY, SOULFLY, SEPULTURA) in Berlin, Germany during the “Max & Iggor Cavalera Return To Roots” European tour. You can now watch the chat below.

Speaking about CAVALERA CONSPIRACY‘s fourth album, “Psychosis”, which was released on November 17 via Napalm Records, Max said: “What I like about it is it’s a different kind of record — it doesn’t have hit songs. A lot of the later SEPULTURA stuff — like ‘Roots’ had ‘Roots Bloody Roots’; it was a big hit song. ‘Refuse/Resist’ was a big song. [The first] SOULFLY [album] had ‘Eye For An Eye’. ‘Psychosis’ doesn’t have that; there’s not really one big song. It’s more like [SEPULTURA‘s 1987 album] ‘Schizophrenia’ — ‘Schizophrenia’ is the same. There’s not one big song on ‘Schizophrenia’; you can’t pick one. It’s even more different than [SEPULTURA‘s 1986 album] ‘Morbid Visions’; ‘Morbid Visions’ had ‘Troops Of Doom’. So this record is really similar to ‘Schizophrenia’ [and] that era — no hit songs, [they’re] all together, but as a group of songs, it’s really strong. And that’s what’s cool about it.”

Max described the musical direction of “Psychosis” as “a mix. It’s a real death metal/thrash metal-mix album, most of the stuff, except for ‘Psychosis’, the title track, which is instrumental, which is a bit like tribal prog rock, and ‘Hellfire’, which is more like NAILBOMB and GODFLESH, which also has Justin from GODFLESH on it. Everything else is very straightforward death/thrash. There’s one song, ‘Judas Pariah’, that’s a bit more black metal, and that was really fun, messing around in that area. I don’t do much with that stuff, but that song came out really good. I kind of wanna do more of that, ’cause it was really fun and it was a blast making that song. But the bulk of the record is really… kind of like what a lot of people like about me and Igor [Cavalera, CAVALERA CONSPIRACY drummer and former SEPULTURA member] is the era of [SEPULTURA‘s] ‘Beneath The Remains’ [and] ‘Arise’.”

According to Max, the overall direction of “Psychosis” was influenced in part by the album’s producer, Arthur Rizk. “The producer was really into the whole catalog of me and Igor, but specifically those albums [‘Beneath The Remains’ and ‘Arise’] he liked a lot,” he said. “So he was going for delivering vocals that would be more towards those records than the newer stuff I’ve done. And, yeah, for me, it was fun. It was, like, ‘Sure, we can try to recreate some of the magic.’ But I think the album has a sound of right now, which I think is cool. It’s got noise and elements like that; there’s a lot of noise between every song — there’s no silence.”

In the end, Max believes that it was “kind of cool” for him and Igor to “embrace [our] past to go to the future, so we kind of embrace those old records and the feeling of [nostalgia] that those records gave and create something on top of it. I think it’s similar, maybe a little bit, to what CARCASS did with ‘Surgical Steel’, ’cause it reminds me of earlier CARCASS,” Max said, reffering to CARCASS‘s 2013 comeback release. “And it’s cool when you can do it and it works. When you do it right, like ‘Psychosis’ or like ‘Surgical Steel’, it feels good — you’re inspired by the past, but it’s going to the future.”

Max and Igor have spent the past year a half on the road as part of the the “Return To Roots” tour, during which they are celebrating the 20th anniversary of SEPULTURA‘s classic album “Roots” by performing the LP in its entirety. 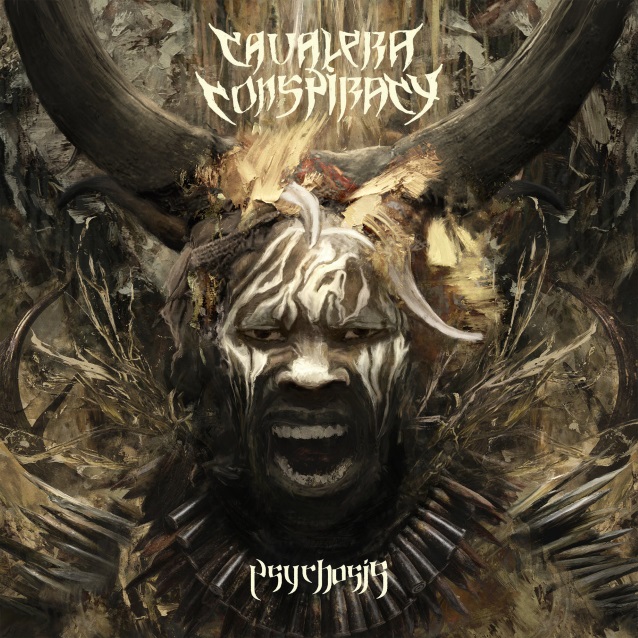