CORELEONI Feat. GOTTHARD Guitarist, RAINBOW Singer: Listen To 'All I Care For' Song

On November 17, guitarist Bill Steer of British extreme metal pioneers CARCASS was interviewed by “Met Al Metal”, Israel’s metal radio show hosted by brothers Lior and Niv Peleg. You can now listen to the chat using the audio player below.

Asked if CARCASS is planning to release the follow-up to 2013 comeback album, “Surgical Steel”, Steer said: “Yeah, there is a plan of a kind — purely in terms of working on material. I mean, we haven’t booked any studios or anything, ’cause we’re really not that far down the line. It’s been five years or so of regular travel. We’ve been away so much. We’ve done five or six American tours off this record, so there hasn’t been a huge amount of time to do that kind of work in between. Everyone just goes their separate ways and kind of avoids each other until it’s time to go [on the road] again. But there have been times when Dan [drummer Daniel Wilding] and myself have got together and worked on a bunch of tunes, and lately Jeff‘s [Walker, bass/vocals] started to get involved. So it’s kind of entered the second phase. And I think before long, we’ll start to demo some stuff, just to get a feel for the direction of the album. We’ve got tons of material; it’s just trying to find a focus for this, really.”

Steer told Dead Rhetoric last year about a possible musical direction for CARCASS‘s next studio album: “All I would say is there has to be small stylistic elements that haven’t appeared on CARCASS records before. We’re going to be walking the tightrope of sounding like the band CARCASS and bringing in new elements. There’s nothing valid to say if we’re going to do a retread… what’s the point?”

“Surgical Steel” sold around 8,500 copies in the United States in its first week of release to debut at position No. 41 on The Billboard 200 chart. 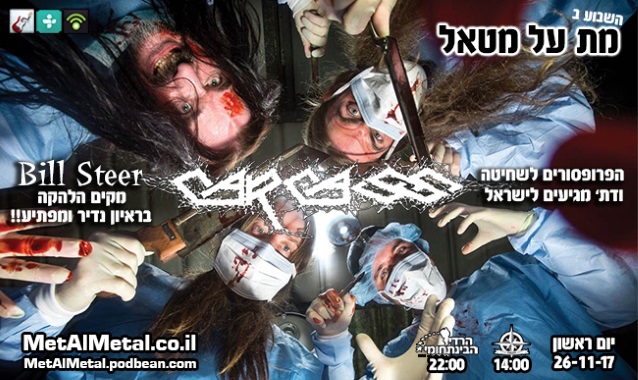